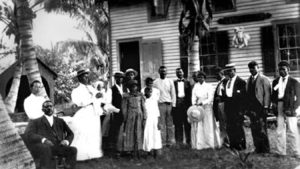 MIAMI — This year, Miami Dade College (MDC) proudly celebrates Black History Month with an array of community and educational activities that shine a light on Black Migrations at each of its eight campuses.

Ordering Xanax From Canada The beginning of the 20th century in the United States saw a movement of Blacks from the American South to the industrialized North and beyond. Such migrations, which largely included relocation from farms to cities, resulted in a more diverse urban population and a changing social milieu. The period also quickly gave rise to a growing number of Black industrial leaders and entrepreneurs, as well as new urban churches, religions and music genres like ragtime, blues and jazz.

http://boldmarketing.com/virtual-tours/lots-1-4-front-st-bayfield-wi But not everyone headed north. Many Black migrants from North Florida and numerous Southern states settled in Miami. Black immigrants also arrived in Miami from the Bahamas, Cuba, Haiti, Jamaica, Trinidad and Tobago, Barbados and other countries throughout the Western Hemisphere. As early as 1904, the official City of Miami directory listed numerous Black-owned and -operated businesses, as well as a medical doctor, 26 laundresses and several hundred laborers. By 1915, the Black population in Miami was approximately 5,000, and their holdings in real estate and personal property were estimated at $800,000.

http://tamaralounge.com/?amp;736=e8 Don’t miss the wide variety of events available collegewide in honor of Black History Month. From Redlining: Then and Now, an insightful discussion on land distribution throughout history, to Healthy Soul Food, a food demonstration exploring the origins of popular African-American, Caribbean and Southern cuisine, MDC students and the community can participate in an abundance of festivities happening at each campus.

Education must be governed by standards to achieve the learning goals that all parents seek for their children, said Dr. Reagan Flowers, a noted trailblazer in the field of STEM and the founder and CEO of Houston, Texas-based C-STEM Teacher and Student Support Services […]

Fake Xanax Bars Online      According to the history of Juneteenth, on June 19th, 1865 and more than two years after President Abraham Lincoln signed the Emancipation Proclamation which became official on Jan. 1, 1863, Union soldiers led by Major General Gordon Granger landed at Galveston, Texas, with news that the war had ended and slaves were now free. […]

Is Democracy overrated? By Lekan Oguntoyinbo, NNPA Columnist Long before China and India became the economic wonders of Asia, there was Singapore, a small, diverse country with no natural resources that took the audacious step […]