For the Miami Dolphins, college’s have been an important part of their team.

It’s not every day where you find millionaire professional athletes graduating college. However, in the last two weeks, the Miami Dolphins had six of their players graduate from universities. Linebacker Jelani Jenkins got his degree from the University of Florida, which is why he was absent from voluntary veterans minicamp. Meanwhile, long snapper John Denney, safety Michael Thomas, and cornerback Chimdi Chekwa all graduated from the University of Miami’s MBA Program. As well as linebacker Neville Hewitt who received his degree from Marshall University and defensive tackle Chris Jones is in the process of getting his from Bowling Green.

“It’s special and puts a period on this whole Gators experience that I’ve had, to be able to go and walk in the same Swamp that I played football in,” said Jelani Jenkins. “It was always important for me to finish up. It was always part of the plan.”

Speaking of college, for the newest members of the Miami Dolphins, they each had to leave their respective colleges behind in order to make the leap into the NFL. Even though many expect the 2016 draft class to leave their own stamp on the league, their first step in the thousand mile journey begins with rookie minicamp.

The star of the show at rookie minicamp was none other than offensive lineman Laremy Tunsil.

It’s only been nine days since his draft night but now the rookie who’s now infamously associated with a gas mask now has to start over and create a new name for himself. 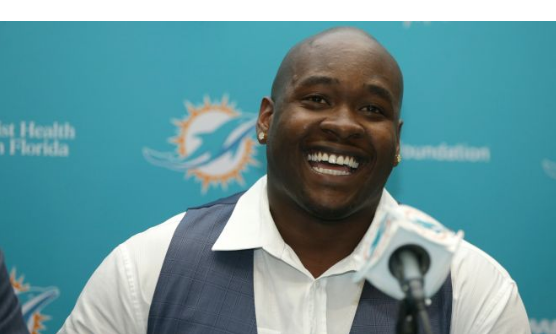 Thankfully, Tunsil is a quick study and he’s not shy. Anytime when a person comes into a new work situation the best thing they could do is to make friends with the smartest or best person in the room. For Tunsil, he didn’t hesitate a second to do that. Mike Pouncey by far is the leader of the Miami Dolphins offensive line. He’s their best player. He’s their smartest player. He’s also the person that gets the fire ignited within the trenches. That’s why it’s a telling sign that the rookie Tunsil is staying close to Pouncey’s hip.

“I’ve been talking to Mike Pouncey a lot about the film work and how to work, and the field stuff. (He’s) just, somebody, I can look up to, somebody who can show me how to lead the way” Tunsil. 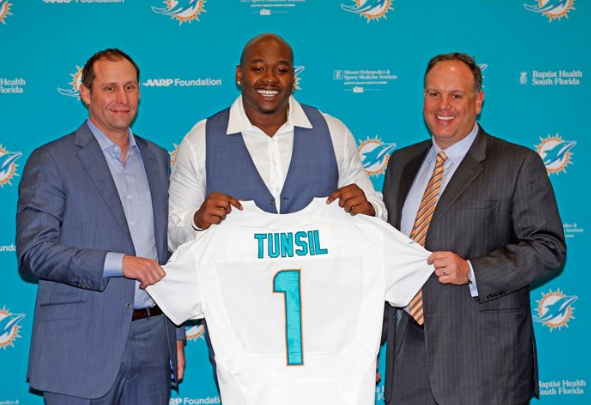 For the Miami Dolphins, they should be more than thrilled that Tunsil’s going to learn from one of the best offensive linemen in the game. If the Dolphins could get even half of the production from Tunsil that Pouncey plays with then they’ve got themselves a true player. The best part of camp is that Tunsil has already started making an impression on his coaches.

“He has a great disposition. He has been very impressive in this camp with how he has attacked the learning, and even with the adversity and how he handled it. That could shipwreck you” said offensive coordinator Clyde Christensen. “For a 20-something-year-old guy, I’ve been impressed with how he’s handled it. As an offensive lineman, you’ve got to keep trucking.”

Now with the summer upcoming, it’s less than four months away before we all get to see what the management, coaches, and media personnel have all been raving about when it comes to Tunsil.

The Miami Dolphins have a bright future. It was that type of feeling in the atmosphere when the Dolphins went up to Foxborough, Massachusetts to play against the New England Patriots. The game didn’t go […]

It’s been scientifically proven that that the most important meal of the pay is breakfast. In addition to maintaining a healthy body weight, breakfast provides a person the energy that’s needed to survive throughout the […]