Davie, FL – Miami Dolphins players, coaches and members of the Miami Dolphins Women’s Organization (MDWO) provided holiday cheer and presents to over 170 students this afternoon from Miami Dade and Broward County Public Schools along with children from foster care programs and additional charities as part of the Fins and Kids Holiday Toy Event at Doctors Hospital Training Facility at Nova Southeastern University.

“I think it means a lot and this is the most rewarding part about being an NFL athlete, is that we get a chance to give back and do special events like this,” said Reggie Bush said. “Being able to give them bikes and see them smile and be all excited about getting them means so much to me. I remember when I was a little kid I always wanted a bike and just to get a bike as a kid, that’s like the best present you can get. I think all these kids are happy and I think they’ll enjoy all of the gifts.”

The day’s festivities began with a dance contest that was emceed by Bush and Brian Hartline and judged by the players at the team’s indoor practice facility.  After the dance contest, participants received holiday toys that were chosen from their own personal wish list and were donated by players and coaches.

“This is probably the highlight of our student’s Christmas,” said Mark Zaher, the Director of District and School Operations for Miami Dade Schools. “To spend a day here with players sends a message that people care about them. This highlights what the Miami Dolphins stand for in our community. This is something that the team does annually, this is something they never miss and it sends a message that our players are not only committed on the field, but they are committed off the field as well

.”LR – Jason Trusnik, Cameron Wake and Reggie Bush passing out toys to students at the Fins and Kids Holiday Toy event in Davie, 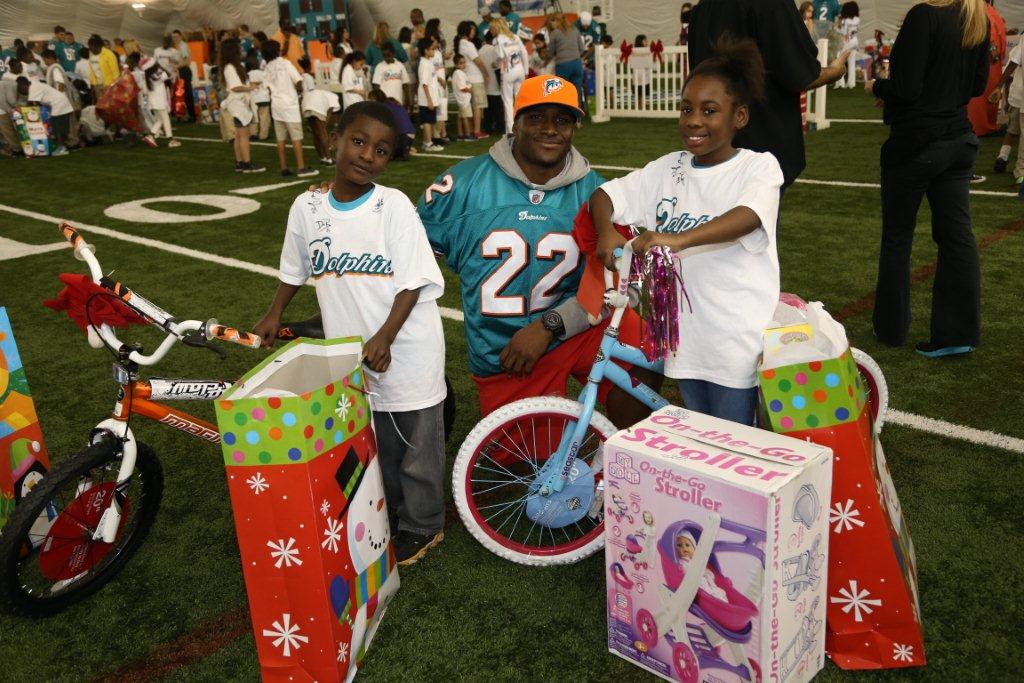