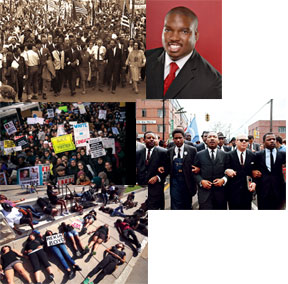 Sunday nights are precious times for pastors. After spending the week in preparation and prayer for Sunday morning, there is an indescribable release that happens for most pastors once Sunday morning is over. Sunday night is the one night that I can almost guarantee that I will be at home resting. Last Sunday night was different. After the recent shootings of Philando Castile and Alton Sterling, I spent the week searching for an event in my city that would address these issues. I came across an event titled “Community Circle for Black Lives.” This event was sponsored by the Dream Defenders of Broward County.

Dream Defenders was formed to combat racial violence after Trayvon Martin was gunned down in a Florida suburb in 2012. Dream Defenders are also closely connected to the Black Lives Matter Movement. Along with a few associate ministers from my congregation, I spent Sunday night at this event listening and learning. This was a time where people were able to express how they were feeling after the publicized back to back murders of young Black men.

While most congregations struggle desperately to attract Millennials (ages 18-40) to enter our church buildings on Sunday morning, this event attracted over 400 young adults on a Sunday night. The event was only planned five days before. While news media often portray members of these types of events as thugs and criminals, this event was filled with just the opposite. There were medical doctors, principals, mental health professionals, lawyers, teachers all present to help where they could. As I stood and listened, I discovered rather quickly that this was more than a meeting; this was a movement.

We are living in a day of movements. Movements are simply a group of people working together to advance their shared political, social, or artistic ideas. This can be positive or negative. Think of all the movements that are shaping our society: Black Lives Matter, All Lives Matter, Blue Lives Matter, Make America Great Again, Feel the Bern, BankBlack, I’m With Her, etc. I could go on and on. This election cycle will go down in American History as one of the most tumultuous and divisive political seasons that this county has ever seen. What we are seeing in our country is a collision of movements. Movements are being birthed in response to other movements. The question that needs to be answered is “How should the Church respond?”

I am native of Nashville, Tenn. and moving away from home helped me realize how significantly Nashville has shaped me as an individual. Nashville is one of the few cities in America that is home to four Historically Black Colleges and Universities (HBCUs) (Fisk, Tennessee State University, American Baptist College, and Meharry Medical College). I at-tended elementary and middle school at the now defunct St. Vincent Depaul Catholic School, which was one of the few all-Black private schools in the country.

I grew up hearing stories a-bout the late Rev. Dr. Kelly Miller Smith, Sr., the former pastor of the First Baptist Church Capitol Hill and founder of the Nashville Christian Leadership Council. He worked tirelessly beside leaders like the Rev. Dr. Martin Luther King, Jr., Rep. John Lewis, and many others to organize Nashville sit ins which eventually led to desegregation at Nashville lunch counters. One of the early formative figures in my life who remains a model for me is the Rev. James “Tex” Thomas, pastor of the Jefferson Street Missionary Baptist Church in Nashville, Tenn. My maternal great grandfather who died be-fore I was born was his pastor, and he is proud to let the world know it. He has been fighting for civil rights since the age of 19, and is respected as Nashville’s steady prophetic voice in times of trouble and crisis. I write all of that to say that I grew up in a space and time where my Blackness was affirmed and celebrated. I grew up in a space and time where I understood pastors to be at the helm of the boat of justice when the stormy waters of injustice and racism attempted to flood our communities. We must continue the great legacy of men and women who loved Jesus and loved equality at the same time.

The words of the prophet Isaiah as referenced by Jesus in Luke 4:18 should be our desire today: “The Spirit of the Lord is upon me, because he has anointed me to proclaim good news to the poor. He has sent me to proclaim liberty to the captives and recovering of sight to the blind, to set at liberty those who are oppressed”. Here are five suggestions for how the Church of the Lord Jesus Christ can respond to this collision of movements.

We must attend neighborhood meetings. We must be well acquainted with our politicians and lawmakers. We must have a sharp focus on community based ministries that improve the lives of those who are not just in our congregation but live in proximity to our Churches. We must be well versed in the issues that face our particular communities.

Maggie Anderson writes about the challenge and reward of supporting Black owned business in her book Our Black Year. The premise of the movement is that social change cannot fully happen until economic impact is felt. The Montgomery Bus Boycott is an example of this. Most of our congregations are predominantly African American, so we should be the first to support Black owned businesses, colleges, non-profits as much as we possibly can. This sends a clear message to Millennials that we are working to improve our communities not just spiritually but economically as well.

Over time, he became highly critical of the Civil Rights Movement led by Dr. King and encouraged churches and members not to participate. His words were very powerful, and most Black churches were not interested in being a part of the Movement. Dr. Jackson was on the wrong side of history, and we should make a decision not to be. We should not write off the Black Lives Matter Movement by saying “All Lives Matter”. We should not yell at them, “What about the Black on Black crime?” We should listen, learn, and then labor to see how we can work to improve lives in these critical times.

U.S. should not pressure Africa to embrace same-sex unions

U.S. should not pressure Africa to embrace same-sex unions
[…]