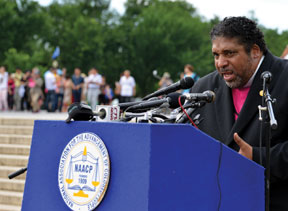 N.C. court to decide the fate of Voting Rights for Blacks

Rev. William Barber II, the president of the North Carolina State Conference of the NAACP speaks during the America’s Journey for Justice at the Lincoln Memorial in Washington, D.C. (Freddie Allen/NNPA News Wire)

WASHINGTON, D.C. (NNPA) – Two pivotal court cases in North Carolina will determine the balance of political power in the state for years to come, and may signal the future of voting rights nation-wide, according to civil rights and voting rights advocates working in the state.

In the wake of the United States Supreme Court decision in Shelby County vs. Holder that gutted Section 5 of the Voting Rights Act, North Carolina state legislators passed H.B. 589, which shortened early voting by a week, eliminated same day registration during the early voting period, prohibited voters from casting out-of-precinct provisional ballots, expanded the ability to challenge voters at the polls, re-moved the pre-registration program for 16 and 17-years-olds and implemented a strict photo ID requirement. Law-makers eased the photo ID requirement leading up to the N.C. NAACP vs. McCrory court case.

In that case, lawyers for the plaintiffs argued that H.B. 589 discriminates against Black and other minority voters.

Denise Lieberman, a senior attorney with the Advancement Project, a multiracial civil rights group, called the N.C. voting law “the most onerous voting law in the country” and said that it combines nearly every conceivable voter suppression tactic to attack voting at every step of the process.

“[H.B. 589] makes it harder to register to vote, harder to cast a ballot, and harder to have that ballot counted,” said Lieberman.

During the trial, lawyers for the state chapter of the NAACP presented clear evidence that each of these provisions was designed with the intent to discriminate and has the impact of disproportionately burdening the right to vote for African American and Latino voters in North Carolina, said Lieberman.

“Our lawsuit argued that H.B. 589 violates Section 2 of the VRA as well as 14th and 15th amendments of the United States Constitution,” Lieberman added.

Rev. William Barber II, president of N.C. State Conference of the NAACP and the convener of Moral Monday Movement, called H.B. 589 “the worst and the most cynical voter suppression law in the country” and said that the attempts to roll back opportunities put in place to overcome past and ongoing discrimination are reminiscent of the days of Jim Crow.

“We have never seen since the days of Jim Crow the attempt to roll back opportunities and provision put in our voting policies to overcome past barriers to overcome past discrimination and continuing barriers and continuing discrimination. We know that whole premise of this law was fraudulent, because it was the claim of fraud,” said Barber, adding that there has been no evidence of voting fraud in the state.

According to the Brennan Center for Justice at New York University School of Law, a non-partisan public policy and law institute, voter impersonation at the polls is more rare than someone getting struck by lightning.

“We know that African Americans and Latinos were far more likely to use same day registration out-of-precinct voting and the first week of early voting and the other measures that were restricted and eliminated by H.B. 589, what’s more is that we know that lawmakers knew that before they passed the H.B. 589, because they implemented those measures precisely to make voting more accessible for the very communities that ended up using them the most,” said Lieberman. “That evidence was present, front and center to lawmakers when they introduced H.B. 589.”

The Associated Press reported that Republicans used the North Carolina maps in the 2012 and 2014 elections to gain veto-proof majorities in the state legislature and to win 10 of the 13 seats in the state’s congressional delegation.

Anita Earls, the executive director of the Southern Coalition for Social Justice, said that it has always been understood that the Voting Rights Act not only protected the right to cast a ballot, but also the notion that each vote carried the same value. In the court case challenging North Carolina’s revised voting maps, lawyers for the plaintiffs argued that North Carolina’s voting maps diluted the power of the Black vote by intentionally “stacking and packing” Black residents into racially gerrymandered districts.

Laurel Ashton, the field secretary for the North Carolina State Conference of the NAACP, said, “We are seeing both demographic shifts and a new generation of voters that are changing Southern voting patterns. The attacks on Black and Brown voting rights is a response to these changes and while White people may not be the target, its consequences may impact us all,” said Ashton.

The attacks on voting rights are not limited to the South. The Brennan Center for Justice reported that 15 states will have new restrictive voting laws in place for the 2016 presidential election.

“Let me be clear, the stakes here are high,” explained Lieberman. “The outcome of this case will determine whether countless voters of color in North Carolina will have their right to vote denied or abridged in the 2016 elections and beyond.

Lieberman continued: “This case will test the enduring strength of the Voting Rights Act and its ability to protect voters in states across the country in the future.

Lieberman said that the law passed in North Carolina is exactly the type of voter suppression tactic that the Voting Rights Act was enacted to prevent.

Anita Earls, the executive director of the Southern Coalition for Social Justice, said that an injunction levied against H.B. 589 by the Fourth Circuit Court of Appeals is still in place, so N.C. voters will still have access to same day registration and will also be able to cast out-of-precinct ballots in municipal elections in 2015.

On September 1, a coalition of civil rights groups delivered letters to members of the U.S. Congress in an effort to press the lawmakers into action around voting rights and Barber vowed to lead protests in state districts represented by lawmakers who supported H.B. 589.

Barber added: “We have to win, because if we don’t win, the whole country loses.”

It’s time for Blacks to diversify their voting portfolios

It’s time for Blacks to diversify their voting portfolios
[…]

Her passion about education and her desire to create opportunities for HBCU students are two of the many reasons she partnered with the NNPA and Chevrolet, the program’s sponsor. […]