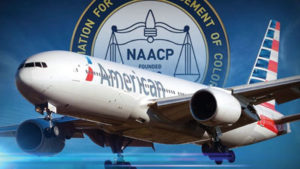 If you’re looking to take a flight soon, the NAACP says that you can go back to adding American Airlines to your itinerary, with the organization announcing that it is lifting its travel advisory against the airline, according to Newsone. The NAACP had worked with American Airlines in an advisory capacity since putting the ban in place last fall over what they called “unsafe” conditions

“We have worked with American Airlines for nearly a year, and they have taken substantive action to begin to address implicit bias,” Derrick Johnson, NAACP President and CEO, said in a release. “They have embraced the situation and we are encouraged by their commitment to improve upon their internal processes and increase inclusion across their airline. Our work with American has included very candid, open and ongoing dialogue about the realities for African Americans who travel with American and other airlines, and we will continue to monitor progress and share feedback with them.”

“We are proud of the diversity and inclusion initiatives already in place at American, but we know we can do even better. So, we viewed the feedback as an opportunity,” CEO Doug Parker said in a letter to staff at the time they announced implementing the changes. “American Airlines can set a new standard in corporate diversity and inclusion, and we are humbled by the opportunity before us to do so.” At the time, there were a lot of questions regarding exactly what these changes would entail, but we have a more concrete idea of the changes it has made.

These include diversity and inclusion gap research; implicit bias training for the airlines’ 130,000 employees; and the launch a discrimination complaint resolution process for workers and customers. Part of what led to the ban in the first place was a slew of high-profile cases of black passengers being mistreated on American Airlines flights. Activist Tamika Mallory was thrown off a plane following an argument about seat assignment, saying that; “white male aggression” was on display. Rapper Joey Badass also called racial profiling when he was told by a flight attendant in January that he “didn’t belong” in first class. American Airlines had also been on top of the aviation industry in terms of discrimination complaints. While the lift of the ban is a good sign, the real proof will come moving forward if the company has a proper culture change.