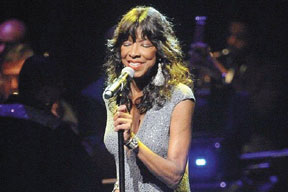 “Natalie fought a fierce, courageous battle, dying how she lived… with dignity, strength and honor. Our beloved Mother and sister will be greatly missed and remain UNFORGETTABLE in our hearts forever.”  – Robert Yancy, Timolin Cole & Casey Cole, January 2016

Natalie Cole was an accomplished product of her deep-rooted musical heritage. A chart-topping R&B crooner in the ‘70s, Cole went on to even greater popularity and accolades with her smooth transition to jazz and pop music standards – successfully reinterpreting American classics and singing the tunes that once made her father an international recording star.

at the tender age of six, singing on a Christmas album with her father Nat “King” Cole. Born in 1950, Cole grew up surrounded by music and music royalty. Her father was already a rising music star and renowned jazz pianist. Her mother, Maria Cole, was a one-time performer with the Duke Ellington Orchestra. Cole once said that her father – who died of lung cancer in 1965 when Cole was 15 years old -had been everything to her, and that was more than evident in the turn her ever-evolving career would take; reuniting her voice with her fat-her’s through the miracle of technology.

Cole got her start in the music industry as an R&B singer. Her singing style was a marked departure from her father’s style.

Where Nat was cool and refined, Natalie was warmer and soulful. The American music buying public went on to embrace Natalie Cole’s new sound and solo career. Ten years after the death of her famous father, and a brief detour from music that earned her a bachelor’s degree in child psychology, Cole went on to win two of her nine career Grammys. She earned one for “Best New Artist” of 1975 and the other for “Best Female R&B Vocal Performance” for her up-beat, chart topper This Will Be (An Everlasting Love). Her career soared with four gold and two platinum records. Her first platinum album, Unpredictable, spawned another R&B hit and slow jam standard I’ve Got Love on my Mind. Her fourth album Thankful, which also went platinum, gave us the gift of another signature hit Our Love.

Despite her musical legacy and birthright, despite her own undeniable, autonomous claim to success, Cole suffered setbacks and faced demons that threatened to dismantle everything her beautiful voice had built.

Cole’s star dimmed in the ‘80s, much of it due to alcohol abuse and cocaine addiction. At the height of her troubles, her mother filed a petition for conservatorship to handle Cole’s affairs when she no longer could. After spending time in rehab, her career came back to life in the late ‘80s with a cover of Bruce Springsteen’s Pink Cadillac and the soaring ballad I Live for Your Love.

It was in 1991 that Cole would go on to achieve her greatest success with an album that was as much a nod to the past as it was an acknowledgment of the future of music and its capacity. Cole reunited with her father’s voice and paid tribute to him with new arrangements of songs once made famous by Nat “King” Cole on the album Unforgettable…With Love.

The album, complete with a technologically assisted father-daughter duet of Unforgettable 25 years after his death, earned Cole six Grammys, including “Song of the Year,” “Record of the Year” and “Album of the Year.” The album sold 14 million copies worldwide.

In 2008, Cole announced that she had been diagnosed with hepatitis C, a liver disease spread through blood, which she blamed on her past intravenous drug use. Her growing health concerns never stopped Cole from working and creating that beautiful music that attracted so many fans.

But Cole was more than her voice and her many accomplishments in music, film and entertainment. In an interview with People magazine, Cole is said to have described herself as “a walking testimony [that] you can have scars…you can go through turbulent times and still have victory in your life.” Natalie Cole was a fighter, a model for redemption and legacy in her own right, whose influence and signature on America’s cultural landscape will remain unforgettable.