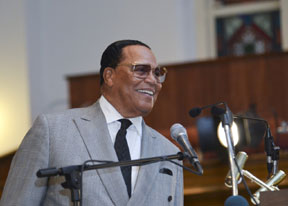 By Linda Poulson, Special to the NNPA from the Afro-American Newspaper

The Nation of Islam is readying plans for the 20th anniversary of the Million Man March in Washington, D.C. The event will once again occur on Oct. 10 at the National Mall.

While the first event on October 16, 1995, was specifically centered around the atonement of Black men, the initiative this time focuses on a myriad of racial and social injustices. Abdul Khadir Muhammad, student minister at Muhammad Mosque No. 14 and the MidAtlantic and Eastern regions, spoke to the AFRO on June 26 to clarify what the upcoming march will be about.

“The title the media is implementing called “Millions for Justice” is incorrect,” Muhammad said. “The actual title is “Justice or Else.”

“It’s not actually a march,” he continued. “It’s a gathering of people showing up at the National Mall like the others that were given.”

Muhammad said topics at the event will include taxation, veterans, police brutality, unemployment and incarceration. “We have to stop, sit down, and settle differences in our community,” Muhammad said. “Any injustice that the country has done to us, justice is due!”

A press conference about the upcoming event was held on June 24 at a church in Washington, D.C. More than 2,300 people from various faiths waited in the Metropolitan AME church in Northwest to hear what the Nation of Islam has planned for October.

The NAACP D.C. Branch also issued a press release stating their plans to participate in the march.

NAACP D.C. President Akosua Ali stated, “The NAACP D.C. Branch is honored to join the Honorable Minister Louis Farrakhan, Rev. Willie Wilson, and leaders nationwide in demanding social justice. The 20th Anniversary of the Million Man March is a historic moment to mobilize, galvanize and epitomize constructive change to address the racial and economic disparities in this country.”

Shelby County Commissioner Tami Sawyer on Wednesday said the county would have to find a way to correct the flaws cited in the Dec. 10 report by DOJ monitor Sandra Simkins. […]

‘Paul was a very intelligent man’

‘Paul was a very intelligent man’