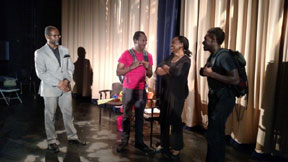 MIAMI GARDENS, FL –The students and faculty at Florida Memorial University (FMU) provided an increased number of cultural offerings on campus to help commemorate this year’s Black History month celebration. The goal was to ensure that the students took away an impactful learning experience. Award-winning novelist, Edwidge Dandicat talked to over 100 students and community members about the Haitian Revolution and the Haitian-American experience.

FMU continues to make great strides to have critical conversations about issues affecting the campus and surrounding community. The school screened three films that provided the platform for those conversations. A screening and conversation of the documentaries held on campus. Ron Davis, father of Jordan Davis and Sybrina Fulton, the mother of Trayvon Martin spoke about the state of Black America at the screening of three and a half minutes, 10 Bullets. They both encouraged students to take their studies seriously because their sons were robbed of that opportunity.  3½ Minutes, 10 Bullets, chronicles the murder trial of Michael Dunn, who fired gunshots into a car of four Black teenagers in Jacksonville, Fla., killing Jordan Davis.

Papa Machete explored the Haitian Martial art form that transcended from the Haitian revolution. The documentary received recognition at the prestigious Toronto Internal Film Festival, as well as the Sun-dance Film Festival. LATINEGRAS dissected being Afro-Latina in society. The Q&A session after the film was heartfelt, enlightening and at times painful as people discussed the intersectionality of identity, race, class and gender.

This year, the annual Pan-African Food Festival added an African Fashion Show. The African Fashion Show was co-sponsored by Samuels Call, a local non-profit that supports the education of girls all over the world. Their sponsorship provided traditional African clothing that were modeled by FMU students.

In addition to the fashion show, there were vendors and free food. Students, faculty, and staff sampled traditional African cuisine such as Jollof Rice and Fufu.

“One of the things I am really proud of in our Black History programing is that we try to be intentional about providing an opportunity for the larger South Florida community, especially Miami Gardens, to participate in all the programming that we have,” says Dr. Keshia Abraham, Dean for College of Arts and Sciences and Chair of the Black History Month Committee. “We used it as an opportunity to showcase African Diaspora through the month of February.”