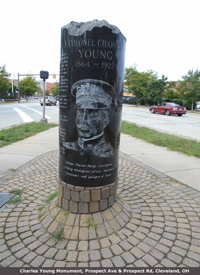 Dr. David E. Marion, 41st Grand Basileus of Omega Psi Phi Fraternity, Inc. will be our Keynote speaker for this event. We will also present the Trailblazer Awards which is given to individuals to recognize their outstanding service and commitment to our community, leadership, and youth. This award will be given to Dr. David E. Marion, Attorney D. Michael Lyles, Retired U.S. Army Brigadier General Kenneth Hubbard, and Sports Agent Dr. Mark Edwards Stevens.

Charles Young was a soldier, diplomat, and civil rights leader. He overcame stifling inequality to become a leading figure in the years after the Civil War when the United States emerged as a world power. His work ethic, academic leadership, and devotion to duty provided a strong base for his achievements in the face of racism and oppression. His long and distinguished career as a commissioned officer in the United States Army made him a popular figure of his time and a role model for generations of new leaders.

This program is part of an ongoing series of public programs offered at the Charles Young Buffalo Soldiers National Monument to promote public understanding of history and special places that have been included in the national park system. For further information, call (937) 352-6757/www.nps.gov/chyo