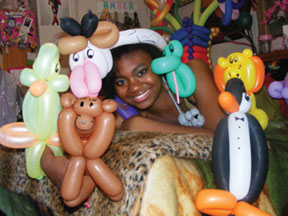 Tim Perez and his mother recently went clothes shopping at a northern California mall for an upcoming summer internship the teenager will work. It was a typical experience for mother and son—until it came time to pay for the items.

As his mom, Therese Perez, reached for her Mastercard, Tim stopped her.

“The bill was a couple hundred dollars,” Perez recalls. “But I pulled out my card and told her I had it. Knowing our financial situation at home, it felt really good to be able to do that. And I have been doing it for a while now.”

Perez, 18, was able to buy his own clothes because he has been earning his own money, and not by washing cars, scooping ice cream, or doing what teens typically do for income. Instead, he launched his own custom website development business, T Perez Designs.

The recent San Leandro High School graduate says he has 10 new clients since incorporating his company, with a vast list of potential customers interested in his services.

Perez learned the fundamentals to start and manage his company while still a teen-ager through NFTE — the Net-work For Teaching Entrepreneurship. This non-profit was founded in 1982 by Steve Mariotti, a native of Ann Arbor, Mich., who previously overcame dyslexia, served as a Ford Motor Company executive, and taught special education in Fort Apache, The Bronx. Literally headquartered on Wall Street, and with operations in the District of Columbia, 12 American states, and 10 foreign countries, NFTE inspires low-income youths to achieve in the class-room and understand the value of being committed employees and dedicated business owners.

Missions accomplished — hundreds of times over.

“NFTE empowered me to start my own business and educated me on how to run it, how to build a business plan, marketing, finances, you name it,” Perez says. “It literally built my fundamental understanding of business. Without NFTE, I would still be trying to find myself. With NFTE, I’m able to buy my own clothes, help pay my college tuition, and support myself when I get to college. Not a lot of teenagers, especially from my neighborhood, can say that.”

Likewise for Amber Liggett of Beaver County, Penn. She started a balloon-making business when she was just nine. But her years with NFTE exponentially increased her company’s profits and legitimacy. NFTE named Liggett Global Young Entrepreneur of the Year in 2011 for her enterprise, Amber’s Amazing Animal Bal-loons. At the awards ceremony, she met NBA legend-turned-renowned businessman Magic Johnson.

Johnson “opened my eyes to the importance of diversifying income sources,” explains Liggett. Liggett says she plans to franchise her business. “The event reinforced the importance of networking as I expanded my professional network to include other young CEOs from places like Ireland, Israel, and Germany.”

Liggett, 19, also was named Black Enterprise’s Teenpreneur of the Year and was featured on PBS’s award-winning television show, Bizkid$.

Liggett reports that her pro-fits have paid for her first year at Millersville University near Lancaster, Pennsylvania. And while that is rewarding for her, Liggett says it is more meaningful that she is a role model for those who grew up around her.

“My ethnicity has been empowering and encouraging for my community,” she says. “I am the first African-American balloon artist that most children in the region have seen, especially inner-city African-American children. Oftentimes, people will book me because of my color and age. Sometimes, I am even hired to be a motivational speaker to children and women’s groups.”

Amber and the hundreds of her fellow NFTE graduates are relatively rare across America. Few inner-city residents — youths or adults — own businesses. There are two million Black-owned businesses in the U.S., according to the Census Bureau. But there are more than 28 million businesses in America, by the Small Business Administration’s count. These numbers crystalize the imbalance that NFTE labors to correct.

For all of NFTE’s commendable work, prospective Black business owners still confront obstacles. Some are embedded practices, such as difficulty in securing financing, enduring higher-than-normal interest rates on loans, and contending with limited access to financial-networking fora. Other challenges are societal, such as a lack of family wealth and a paucity of proper training on company management.

Wise people debate whether these disparities are due to ethnic bias, higher financial risks among minority borrowers, both, something else, or all of the above. Regardless, NFTE has spent 26 years trying to narrow these gaps.

“Everyone at NFTE feels great about the deep impact our programs have had, especially on minority students from underserved areas,” says Derek Newton, NFTE’s communications director. “We don’t focus on business creation. It’s actually about teaching a way of thinking, a mindset, and problem-solving that makes them better employees and leaders in the community. People who are raised in communities short on resources learn to adapt, and incorporate sales skills and basic survival skills transferable to starting businesses.”

NFTE’s results have been inspiring. James McNeal was not thrilled about enrolling in the program in 1989 when his father, a west Philadelphia teacher, first suggested it.  McNeal was 16 back then.

Armed with his NFTE knowledge, “Jimmy Mac,” as he is called, created Bulldog Bikes — one of the few Black-owned businesses in the extreme-sports industry.

“It was an amazing group of like-minded young people who had an interest in being entrepreneurs,” says McNeal, now 43. “It was like a huge think tank where you learned the nuts and bolts of creating a business. It was like the body to my head.”

But starting a small business as a Black man came with race-based challenges, McNeal recalls. “Oh, it was out there — and it still is. It’s still a challenge. You need money, funding, and that can be a challenge because banks or venture capital firms wouldn’t trust you simply because of your race.

“The industry I’m in is all-white.  So, I went through all kinds of things.  [They] didn’t want to do business with you or give you all the media that you needed. They think you have an inferior product, or that you’re too ‘urban,’ and don’t want to be associated with you. So, the racial roadblocks are real. . . I went through a lot of stuff.”

That “stuff,” he said, has been more challenging since 2009, when the U.S. economy took a severe downturn.

“So, NFTE set you up to succeed,” McNeal says. “You could have any idea and [they made it] all [seem] possible. But you still have to go out there. And when you’re out there, you feel the challenges because you’re a minority. You have to get funding and have the right contacts, which was something, as an African-American, I just didn’t have because we don’t run the banks or the venture capital firms.

“That part of it is tough,” McNeal adds. “There is wealth in our community. But finding it is like finding a needle in a haystack when it comes to getting the right funding.”

“The challenges for emerging African-American business owners continue to be access to capital, finding resources,” Brown says. “Generational wealth is not something we have been able to attain and pass on to help start businesses. And nine out of 10 times, we have to find the capital to start businesses.

“Also, less than 1 percent of venture capital money is going to startups of emerging companies by Blacks. And we’re not getting a steady bankroll, as are our white counterparts.”

“I know it sounds corny, but NFTE changed my life by helping me understand what business was and that I could open one doing something I love,” says the fashion makeup artist from Boston and 2003 NFTE graduate. “There is zero chance I would be here if I hadn’t been in the program.”

But 12 years after NFTE, Ivana says, “I see where race plays a role in the challenges we face.”

Starting a service business, like makeup artistry, shielded Ivana from the obstacles that she would have faced had she tried to create a brick-and-mortar entity. But Ivana recently applied for a patent on an invention called Fresh Made that “cleans, compresses, and dries” the face in less than a minute, as she  describes it. The challenges immediately rushed to the forefront.

“The obstacles are there,” says Ivana, 28. “I hadn’t dealt with them before, but now the need for capital became real. But one of the things I learned was when you have a scalable business model, you have to ask for what you want. I had found it difficult to approach the people who could invest resources into my new startup business. I had to get past that, and it has benefitted me.”

Many NFTE graduates have benefitted from its cutting-edge teaching techniques. Virtually all of them stay connected with an organization that set them on their individual paths to success.

“When I think of where I am and where I’m going,” Tim Perez says, “I think back to NFTE. I call it my roots. I think we all do.”

Out of the ashes, hope for change in Baltimore

Out of the ashes, hope for change in Baltimore
[…]