By Jamila Bey, The Washington Informer 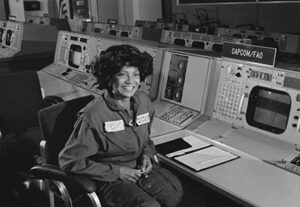 Television pioneer and science advocate Nichelle Nichols has died. The 89-year-old is best known to legions of fans and admirers as revered by “Star Trek” fans everywhere for her role as Lieutenant Nyota Uhura, the communications officer on the starship U.S.S. Enterprise. Nichols would reprise the role for six Star Trek movies.

The importance of her portrayal during the Civil Rights Era, can’t be overstated: she was one of the first Black women featured on television in a role that wasn’t a menial one. However, Nichols grew tired of her television work and considered leaving for the bright lights of Broadway. Another Civil Rights legend stepped in to change her mind.

Story has it that Nichols was at an event when Rev. Martin Luther King, Jr. approached her as a fan and gushed about how he enjoyed her on the show. She admitted to King that she wasn’t particularly happy with her place in the cast, and she had thoughts to leave. King explained that his children enjoyed her, and he believed it was important that a Black woman being viewed in homes each week as a Lieutenant, and an essential role in the program meant she should stay on the series. Persuaded, Nichols continued her role in the original cast until Star Trek was ultimately cancelled in 1969.

Parlaying her position as television trailblazer into a similar one in the real world, Nichols became an ambassador for real science. NASA partnered with Nichols to recruit women and HBCU students to apply to be astronauts. The next astronaut class, appointed in 1978, included Guy Bluford, the first Black American in space, and Sally Ride, the first American woman in space.

President Joe Biden paid tribute to Nichols in a statement, “In Nichelle Nichols, our nation has lost a trailblazer of stage and screen who redefined what is possible for Black Americans and women.” The White House missive continued, “With a defining dignity and authority, she helped tell a central story that reimagined scientific pursuits and discoveries. And she continued this legacy by going on to work with NASA to empower generations of Americans from every background to reach for the stars and beyond.”