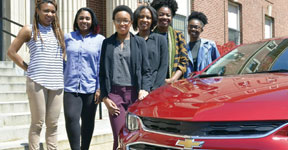 Sidnee King, a 20 year-old broadcast journalism student at Howard University, admitted that she was nervous about her summer plans, the day before the 2016 “Discover the Unexpected” (DTU) journalism fellows were announced.

King said that she missed the DTU program launch on March 23, when officials from the National Newspaper Publishers Association (NNPA), Chevrolet and the School of Communications at Howard University revealed that eight student journalists would be selected to produce content for four NNPA member publications.

“She said, ‘It’s okay, you’re going to figure it out, don’t worry,’ because I panic some times,” said King.

King’s mother reassured her that things would work out, and when they did, King couldn’t wait to share the great news.

“So I just called her and told her that I figured out what I’m doing this summer and it includes an internship and a scholarship and all this good stuff, so she was really excited for me,” said King, a native of Bloomfield Hills, Mich.

Gracie Lawson-Borders, the dean of the School of Communications at Howard University said that she hoped that people see the young journalists as the future storytellers of the Black community.

The dean said that the NNPA, Howard University and Chevrolet were confident that they got the best students for the program.

The Michigan Chronicle in Detroit, The Chicago Defender, The Atlanta Voice and The Washington Informer in Washington, D.C., are the first group of publishers to participate in the program. The students’ stories and video packages will run in Black newspapers and on news websites across the country.

Lawson-Borders surprised the student fellows last Friday with a special guest appearance by Hip-Hop pioneer MC Lyte, who also serves as the national spokesperson for the DTU program. MC Lyte revealed that the fellows will have access to a 2016 Chevrolet Malibu to use as a pool car during their internships.

“Just to see the fellows getting inside the [Malibu] and shooting video and snapping photographs and talking… it was all truly amazing,” said Michelle Matthews-Alexander, Chevrolet’s Diversity Marketing Manager. “We’re thrilled and we can’t wait to see the content that the students will create.”

Benjamin Chavis, the president and CEO of the NNPA, said that not only will the journalism fellows get a good learning experience, but the NNPA publishers will also gain from the perspective that the millennials will bring to their newsrooms, “so, this is going to be a mutually beneficial program this summer.”

Victoria Jones said that having access to the Chevrolet Malibu to use as a pool car adds a level of professionalism to the whole experience.

“When I found out that there was another opportunity to work with the Black Press, I was really excited about it,” said Jones.

Jones said that unlike the content that she created at the AFRO, when she interned at mainstream media outlets the stories were often tailored for a general audience.

While Jones said that she’s looking forward to reporting about the D.C. statehood issue and voting rights at The Washington Informer, King said that she wants to write about education reform in Detroit and the Flint water crisis.

Matthews-Alexander said that she enjoyed having face time with the journalism fellows and the opportunity for Chevrolet to showcase its commitment to the program.

“What’s most exciting about this phase of the program, from a Chevrolet perspective, is that [students] are going to go out and really uncover these unexpected stories and find those men and women in these communities that are doing amazing things that we might not hear about,” said Matthews-Alexander. “So for [Chevrolet], a brand that is focused on the positive and being optimistic and ingenious, at the end of the day, we feel like this is perfect.”

Are we the worst generation?

Are we the worst generation?
[…]

On the evening of Dec. 1, 2016 six days after Fidel Castro’s death at age 90, Rev. Jesse L. Jackson, Sr., stood in the pulpit of the packed First Presbyterian Church of Havana. Applause washed over him and moon-light danced on the warm waters of the nearby Caribbean. […]