Now, the promises made up of Slogans, Hopes, Inspirations and Talks are about to hit the fan

For all the promises of God find their Yes in him. That is why it is through him that we utter our Amen to God for his glory. 2 Corinthians 1:20 ESV 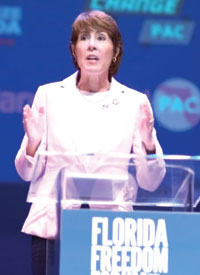 Graham: I’ll demand every building built with state fundsis built with solar panels on the roof.

Gillum: We should be very clear…I don’t know anyone who wants to earn minimum wage. We need to do better. 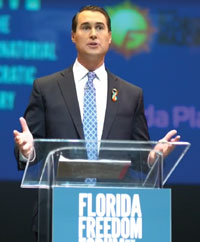 King: The question is how to come up with new income. We need to reduce mass incarceration. 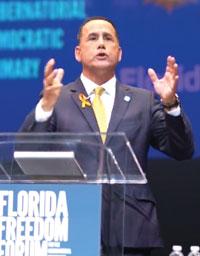 “It will be extremely difficult to almost impossible for candidates whose platforms show any empathy towards the “common” person to win without the Black vote. Experts say there must be better outreach efforts to encourage Black voters because they, especially Black women, hold the power to elect. –Bobby R. Henry, Sr. Publisher

Florida Governor Democratic candidates may have varied platforms on some issues; nevertheless, on Monday night, they were in agreeance on the instantaneous resignation of Agricultural Commissioner Adam Putnam for his office’s lackadaisical implication of background checks for concealed weapon permits, salary increase for teachers, more provision for Puerto Ricans in the aftermath of the storms and moving to the state and the environmental push to take action on sea-level rise.

The winner of the democratic primary will face the republican gubernatorial nominee.  It will be a hard-fought battle and a scrapping fight to the finish line.

Gwen Graham is the only female in the democratic race for the next Florida Governor.  Gwen Graham is the daughter of former Governor Bob Graham. She is also a former U.S. Representative for Florida’s 2nd congressional district.  She will need to show resilience and strength to battle the fierce attacks launched during a race of this magnitude. She will also have to demonstrate her compassion and empathy for the millions of Floridians who are looking for a governor who cares about their issues: violence and gun control, the environment, wages, housing, jobs and more.

Gwen Graham: It’s not enough but I am glad it was something … I propose an Executive Order, there’s a statute in Florida that allows the governor, whoever she is, to ban the sale of high capacity magazines and investment in mental health resources and schools.

Andrew Gillum: Tomorrow we will commemorate the people who died at the Pulse Club shooting. Laws like Stand Your Ground have no place in Florida.

Chris King: This is one of the toughest issues we have in our state … I have an ambitious plan that includes a tax on bullets that would fund programs that prevent gun violence.

A Candidate’s message will have to be more than just anti-Trump to ensure turnout in record numbers for elections. Black voters need to feel respected. They need to see their community’s issues and concerns being paid attention to and their businesses invested in.

“It’s my belief that the way we’re going to win this race — not just the primary, but the general — is by giving more of our voters a reason to turn out,” said Gillum in a previous interview.

It appears that both candidates Levine and Green understand the need to court Black voters since they both have well known Black athletes in their camps. Levine has Ray Allen, a hall of fame shooting guard, and Palm Beach billionaire Jeff Greene has former boxer Mike Tyson who was the best man at his wedding.

In that same interview Gillum cited his legal fight with the National Rifle Association over an ordinance banning guns in city parks; his city’s growth of solar power; his support of early education; and the school system’s programs to train more students for skilled jobs that allowed half of the graduating high school class to already have job offers.

“Three hundred years of humiliation, abuse and deprivation cannot be expected to find voice in a whisper,” Dr. Martin Luther King Jr. wrote in his book Why We Can’t Wait.

Gillum said that, “mental health care shouldn’t only be brought up following mass shootings.” He is for full legalization of marijuana, and he would veto any budget that took money out of the affordable housing fund for other uses.

This election is going to be very interesting to say the least; however,  the question is what will your role be in determining the outcome?

More than three hundred years later, the voice of the Black community, once a whisper, has become a thunderous roar through the power of voting.

“R.I.P. Ntozake Shange (#ForColoredGirls) #YouAreBroadwayBlack you will forever be remembered and eternally etched in our minds as The Lady in Orange, a prolific poet, an amazing play-wright, and the Black feminist we all aspire to be. Well done,” a tweet from the Broadway in Black twitter account read. […]

According to blackwomeninpolitics.com, a comprehensive database that lists women of color running for political offices in 2018, currently, over 600 Black female candidates are running for offices nationwide. […]