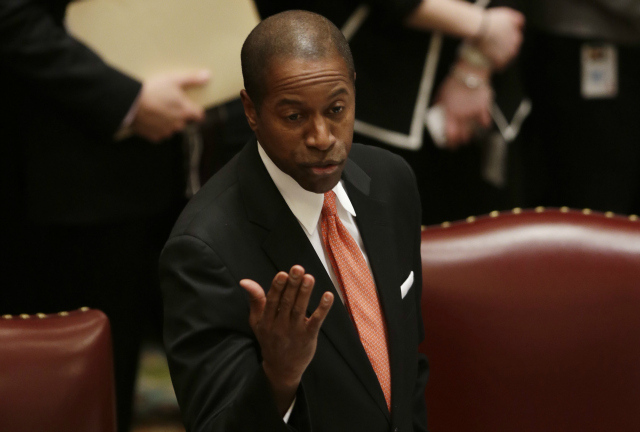 A scandal has unfolded in New York involving a Democratic State Senator and other elected officials, including GOP members who hold office. Sen. Malcolm Smith (pictured) and City Councilman Jay Halloran, both of Queens, were arrested by FBI authorities earlier today on bribery charges related to the upcoming mayoral election.

New York Daily News reports that Smith and Halloran (both representing Queens), Bronx Republican Chairman Jay Savino and Queens GOP vice chairman Vincent Tabone hatched a plan to get Smith onto the Republican ballot to challenge for the seat Mayor Michael Bloomberg currently holds. Using an elaborate plan of hidden consulting fees, Halloran was the money man responsible of paying off Savino and Tabone in order to get them to vouch for Smith’s move to the GOP.

Under city rules, three of the five borough leaders must support an elected official’s party move to be included on the ballot. Although Smith made no public announcement of his intentions to run, it appears this was a clandestine operation for months. FBI officials were able to obtain private conversations and knowledge of transactions by way of an undercover sting. An agent posed as a wealthy real estate mogul and acted as a go-between associate for the elected officials.

Spring Valley’s Mayor and Deputy Mayor Noramie Jasmin and Joseph Desmaret were also arrested in the bizarre plot. Halloran would have been paid $20,500 while Tabone and Savino were reported to gain $40,000 in bribes with a promise of $40,000 in additional monies. Smith was to use his senatorial authority to green light a project in Spring Valley, this based on the exchange of illegal cash.

A statement from Smith’s office claims that the senator was not involved in any wrongdoing.

“The senator has a record of dedicated community and public service for over 13 years and will be vindicated when the truth comes out and looks forward to all the facts that will be coming out in the near future,” said a spokesperson.

Desperation and Despair in Haiti as Relief Efforts Stall

“In what is already a challenging time for the people of Haiti, I am saddened by the devastating earthquake that occurred in Saint-Louis du Sud, Haiti,” President Joe Biden said in a statement. “We send our deepest condolences to all those who lost a loved one or saw their homes and businesses destroyed. I have authorized an immediate U.S. response and named USAID Administrator Samantha Power as the senior U.S. official to coordinate this effort.” […]