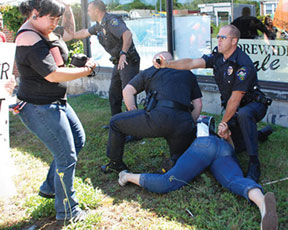 Recently, Congress passed the “Death In Custody Bill.” The new bill, sponsored by Congressman Bobby Scott, requires police departments to report when someone dies in custody in a jail or is involved in a shooting.

On Dec. 19, Roland Martin and the NewsOne Now Straight Talk panel discussed the potential impact this bill will have on police departments around the nation.

NewsOne Now panelist, Lauren Victoria Burke told Martin the bill is “substantial.” She also stated this bill “requires the department of justice to not only just look at the statistics with regards to deaths in custody, but to do something about it when they get the numbers.”

The bill “is the law of the land given that the President signed it yesterday,” Burke said.

Also on Dec. 18, President Barack Obama signed an executive order creating the Police Accountability Task Force. They have been tasked with going around the country and coming up with recommendations to bring back to the President to create the accountability between police forces and the community.

Valerie Jarrett, Senior Advisor to President Barack Obama told Martin via phone during the radio portion of the show, “The recommendations back to the President will be these are the best practices that we see. The report will obviously be public and it’s designed to help local law enforcement and communities take specific steps to enhance that process.”