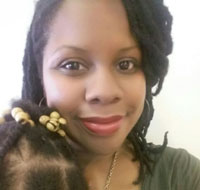 I started my now 10 inch dreadlocks at the Akuwaa Locs & Natural Hair Spa in Accra, Ghana when I was three months pregnant with my daughter. My intentions were to go the “faux dread” route, a temporary style that contorts synthetic hair into locs, but I figured since I was beginning the journey of motherhood in the Motherland, starting my second set of dreadlocks would take on a deeper symbolic and spiritual quality. The salon owner squealed in delight when I agreed to the permanent dreads and committed to locing my hair myself. People rarely go “all the way”, she stated, herself being the only person in the shop with permanent dreadlocks.

I love my hair. It is beautiful. It is Black. It is a public and political statement of a true acceptance of all that I am and all that my people are and have been. It frightens…because anything authentically Black that goes against the narrative of White Superiority is feared in this country. The most disheartening piece of this reality is that the anti-Black rhetoric (disguised in respectability) most often comes from other Black people.

On Fox Sport’s July 17, 2017 episode of “Speak for Yourself”, co-host Jason Whitlock drew parallels between guest and former NFL Quarterback Michael Vick’s “fall from grace” and former San Francisco 49ers Quarterback Colin Kaepernick’s current free agent woes. Kaepernick made national headlines last season for kneeling during the national anthem in protest of the killing of unarmed Black men at the hands of police. When discussing Kaepernick’s silent response to teams’ refusal to sign him, Vick suggested the first thing Kaepernick needs to do is “cut his hair”. The style of hair Vick was referring to was Kaepernick’s afro that he began growing last season during his political and social awakening. Afros have been used as tools of political and social protest since the 60’s. They go against White ideals of “straight and tamed” beauty and respectability. An afro is Blackness un-restrained. Vick was asserting that Kaepernick’s kinky, coily, Black afro must be disciplined or cut so he may appear acceptable and “safe” for white team owners. Vick even went as far as to suggest Kaepernick should acquire a life coach to sort out his issues.

When does standing up for your people and accepting one’s natural state translate to confusion and a need to soul search? Kaepernick has found his soul and that is what makes America so terrified of him. For a Black man to suggest to another Black man to strip himself of any evidence of Blackness to be “presentable” demonstrates the level of psychological damage this country has done to Black people.

I have had a Black boss tell me that I “look like a monkey” when I twirl the new growth of my roots between my fingers. I have had a Black boss ask me “when I was going to get my hair done” and then attempt to compliment me by saying my face looks “lifted” when it was retwisted and styled. Any natural hair wearer could speak on similar experiences.

The response to Vick’s unsolicited styling advice has received sharp criticism across all social media platforms. Interestingly, it has conjured up conversations about White standards, respectability, and this odd form of Stockholm Syndrome Blacks have developed to be acceptable and presentable to Whites. Black skin, lips, nose, hair, and bodies are us and any suggestions to contort, cut, reshape, resize, bleach, and fry stem from a racist core. Strangely, my heart breaks for Michael Vick and others like him who internalize the oppressor’s mindset.

Jeff Johnson, a political and social commentator, stated, “We’re so confused, we forgot what free Black people look like”.

Let’s have a conversation!  For comments and/or suggestions emailnicholerichards10@gmail.com

Toward a Living Wage

The poverty line for a family of three (a working mom and two children) is $16,910. A woman working full time at the minimum wage is living below the poverty line. She qualifies for SNAP (food stamps), and possibly for federal housing aid if she can get it. All too often, the list for housing subsidies is full, as is public housing, so assistance is not an option. What is a woman earning such a low wage to do, then, living at the economic periphery? She house-shares lives with family or endures homelessness. She lines up to get food at food banks or from other charities. She struggles to make ends meet, while her Congressional Representative earns $174,000 a year whether they produce or not […]

But his defenders are cheapening his legacy by inflating his accomplishments, which is an insult to the people – Black and white – who lost their lives fighting for civil rights. […]

Time for Black Democrats to switch

Time for Black Democrats to switch
[…]