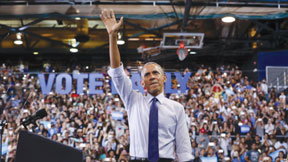 President Obama: ‘It’s in your hands’

With the presidential election coming up, one of the last things that President Obama wants to remind voters while early voting and before Election Day is that the choice is in their hands.

While campaigning for former Secretary of State Hillary Clinton, Pres. Obama spoke to voters at Florida International University on Thursday about how vital this election, a re-minder he’s had to make on every stop of his endorsement tour for Clinton.

“There’s a reason I have gray hair, I’ve been busy,” Pres. Obama said. “We have to work like our future depends on it because the future actually does depend on it.”

And in a time where the future is looking blurry, Pres. Obama is on the offensive front and is hoping that Republican nominee Donald Trump’s actions and mannerisms are enough for people to not vote for him.

Obama said “Once you get past all the noise, all the distractions, all the okie-doke, the choice could not be clearer… Donald Trump is not qualified to be president.” And when laughs rose from the crowd, the President wasn’t one of those laughing.

“You laugh. I’m not joking. He is temperamentally unfit to be commander in chief,” Obama said.

“He said he’s gonna be his own foreign policy advisor. He’s says he’s got a good brain. I won’t comment on his brain,” Obama said. “But I will say this. Anyone who suggests we should torture, wants to ban entire religions, or insults POW’s (prisoners of war) or attacks a Gold Star medalist or talks down on our troops, that’s not who you want as president.”

He even referred to Trump taking offense over ‘Saturday Night Live’ and their portrayal of him during the election season.

Obama said “Anybody that is upset about a ‘Saturday Night Live’ skit is not somebody you want in charge of the White House. No, seriously. This guy tweets during ‘Saturday Night Live’ and says ‘I didn’t like how Alec Baldwin’s imitating me? Really? I mean, that’s the thing that bothers you, and you wanna be president? Come on, man.”

“Come on, man” has become the President’s new catchphrase and often uses it to describe the absurd, the unexplainable, the irrational…and often seems to be aimed at Donald Trump and his supporters.

Coincidence? Not for President Obama.

This election has become more spectacle than politics, more smoke and mirrors than issues and facts, more reality TV than should even be allowed. Obama said, “This isn’t ‘Survivor’ or ‘The Bachelorette’, this matters.”

And what really matters to President Obama as he approaches the final few months of his tenure at 1600 Pennsyvania Avenue is that people re-move their cynicism and uncertainty about politics.

He took time towards the end of his speech to address the young people in the audience and make a plea to them to vote and to make the right choice.

“I know a lot of you are cynical about politics, there’s a lot that gives you reason to. You have a chance to reject divisive politics and mean-spirited politics,” Obama said. “You have a chance to elect a leader who has spent her entire life trying to move this country forward, the first female President, who can be an example for our sons and our daughters. You have the chance to shape history, and I want young people to understand, those moments don’t come that often.”

And President Obama is hoping that with the help of young people, Florida, and voters around the country, history can be made again and Hillary Clinton will be able to continue the legacy being left behind.

Young Americans share why they’re getting involved and voting for President Obama.

A new blatantly fake video of an actress, pretending to be President Obama’s mother, giving birth to a baby who looks nothing like President Obama, lets you know just how desperate conservatives are to win […]

It’s almost as though Obama instinctively connected with that community […]