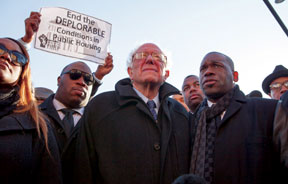 Sen. Bernie Sanders with Rev. Jamal Bryant (r) on a walking tour of the Sandtown-Winchester neighborhood in Baltimore  (Photos by Cheriss May, Howard University News Service)

BALTIMORE, MD – On a cool, but sunny Tuesday morning, as residents waited at the bus stop and workers were busy on the reconstruction of the CVS at 2509 Pennsylvania Ave. that was burned down during Freddie Gray protests, the Rev. Jamal Bryant and a handful of community members lead presidential candidate and U.S. Sen. Bernie Sanders on a tour of the neighborhood that erupted following Gray’s death.

The group, dwarfed by the nearly 40 media members covering the event, walked through the Sandtown-Winchester neighborhood where 25-year-old Gray had lived and protests took place even as a trial was taking place down-town for the first of six Baltimore police officers charged with Gray’s death.

Sanders, Bryant and the three others started at the corner of the burned down CVS, which was seen by millions of Americans on television as it was being looted, and made their way through about four blocks of the neighborhood. Some residents called out their support to Sanders and also called for better public housing conditions.

Sanders remarked on the dearth of restaurants and groceries in the neighborhood.

“It probably costs more to eat here,” he said. “What are you supposed to feed your kids, potato chips? The point being it is very expensive to be poor.”

After the tour, the group returned to the Freddie Gray Empowerment Center, located blocks from the courtroom where a trial is underway, for a roundtable discussion with Sanders to be followed by a press conference.