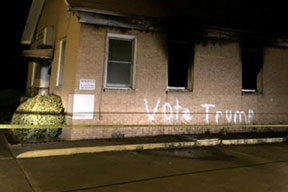 Racists burned and vandalized this Black church with ‘Vote Trump’

Donald Trumps hateful rhetoric has come to roost. White hate groups are bolder than ever now that they feel like they have a candidate on their side that might become President of The United States. This is a SERIOUS issue for the Black community, because that hateful rhetoric is spilling over to action from white hate groups, like what happened on Tuesday.

Things got REAL late Tuesday when a Black Mississippi church was burned and then vandalized with the words “Vote Trump.”

“The majority of the damage done to the Hopewell Missionary Baptist Church in Greenville, Mississippi, was done to the main sanctuary and, thankfully, there were no injuries. However, the words “Vote Trump” were spray-painted on the outside of the church, and a woman at the nearby Rose Hill Missionary Baptist Church said that the community is shocked over the arson and vandalism. The FBI told The Clarion-Ledger that they are aware of the situation and are investigating to “determine if any civil rights crimes were committed.”- thegrio.com

UMMMMM HELL YEAH there were some damn civil rights crimes committed. Black people all I got to say to you is are you going to let white hate groups terrorize you and your community again??? This is 2016, we need to make sure are communities and neighborhoods, whatever the heck you think you live in, are protected. We need street cameras, even if we have to raise money as communities and pay for them ourselves. We need neighborhood watch! We need all of that, because the government doesn’t care. They don’t give a damn about Black people, facts! They aren’t sending the national guard or no one to save us, they will only send the national guard to destroy us and fight against us. Facts, from history alone. The only time they ever sent the national guard to protect Black people is when they desegregated the schools and we are long past that. So wake up Black people, what do you think these white hate groups are going to do if Trump doesn’t get elected and he probably won’t? They are coming for YOUR neighborhoods, so you better be prepared! This is the time when we cannot afford to not be on the same page. We need each other more than ever right now. I hope everyone understands that.

There’s currently a GoFundMe page to raise funds towards repairing the church.