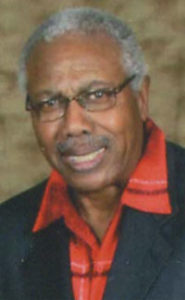 A proud member of Dillard High School’s Class of 1955, Adolphus Wood Williams passed peacefully at his home on Friday, September 14. He recently celebrated his 83rd birthday on September 8 with family and friends.

Adolphus retired in 2000 after 29 years of meritorious service with the United States Postal Service. Previously, he worked for three years at Crown Chemical, five years at the Sun-Sentinel (part time) and 14 years for the Edco Brush Manufacturing Company. Adolphus was an avid golfer with a passion for sports, especially high school basketball. At 6’3” tall, he was a star basketball player at Dillard High School, making his team’s first “slam dunk” during a game. In later years, he enjoyed visiting Slim’s Fishing Camp in Clewiston with his Dillard classmates, many of whom were neighborhood friends, including the late Sonny Porter and Herbert Burrows.

Adolphus is survived by his loving wife, Willie, who served as nurse for her husband as his health declined, and five beloved children: Andrea, Andy (Adolphus, Jr.), Nathan, Alex and Michelle, as well as a host of other relatives and friends.