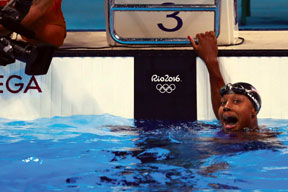 makes history in the pool

Simone Manuel checks the clock after winning a gold medal in the 100-meter freestyle.

RIO DE JANEIRO, BRAZIL — Simone Manuel managed to make history and break a record, all in less than a minute.

Manuel became the first African American woman to win an individual event in Olympic swimming on Aug. 11, 2016. She and Penny Oleksiak of Canada tied for the fastest time, an Olympic record in the women’s 100-meter freestyle: 52.70 seconds.

“I definitely think it raises some awareness and will get them inspired,” Manuel, 20, said about the significance of her accomplishment. “I mean, the gold medal wasn’t just for me. It was for people that came before me and inspired me to stay in the sport. For people who believe that they can’t do it, I hope I’m an inspiration to others to get out there and try swimming. You might be pretty good at it.”

Manuel is sharing a room with another record-setting American swimmer, Katie Ledecky, in the athletes’ village here.

She and Oleksiak shaved 0.01 seconds off the Olympic standard of 52.71, set earlier in the Rio Games meet by Australia’s Cate Campbell. Sweden’s Sarah Sjostrom won the bronze in 52.99.