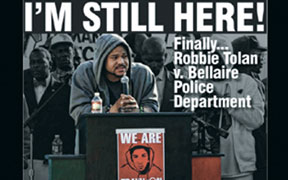 By Jeffrey L. Boney, Special to the NNPA from the Houston Forward Times

The highly anticipated trial of police brutality victim and former baseball star Robbie Tolan is scheduled to begin Sept. 14. The Tolan family will finally have an opportunity to have their long-running civil rights lawsuit against the Bellaire Police Department heard in court, thanks to a unanimous decision by the U.S. Supreme Court back in May 2014.

This trial will be unlike other trials involving cases of police brutality and murders of unarmed Black people in this country by law enforcement officers – what makes this trial so different is that unlike the majority of victims on high-profile cases, Tolan is still alive.

Tolan was shot on New Year’s Eve in his driveway in 2008 by Bellaire police officer, Sgt. Jeffrey Cotton, after he and Officer John Edwards mistakenly identified Tolan’s vehicle as having been stolen. Tolan’s vehicle was found to have not been stolen, nor was either man found to have been armed. More importantly, the license plate number that the officers entered into their computer was the wrong one, leading them to identify the wrong suspects.

“The fact that these police officers typed in the wrong license plate number is one thing, but the fact that the vehicle they were allegedly looking for was so different than Robbie Tolan’s vehicle raises a red flag,” said Tolan family attorney Benjamin Crump, who will be working with several other attorneys to handle the case.

With their ruling, the U.S. Supreme Court reinstated the civil lawsuit filed by Tolan, in which he sued the city of Bellaire and the two White Bellaire police officers in May 2009, alleging unconstitutional excessive force was used when Tolan was shot. The suit also accused Bellaire and police of racial profiling, false arrests and racial harassment. A grand jury indicted and acquitted Sgt. Cot-ton, after only charging him with aggravated assault, which is what led the Tolan family to file the civil lawsuit, which eventually ended up in the U.S. Supreme Court because of the decisions by U.S. District Judge Melinda Harmon and the Fifth Circuit Court of Appeals to grant qualified immunity to the officers.

Robbie believes that his case is going to help a lot of people because the decision by the U.S. Supreme Court now states that a judge can no longer look at one side’s evidence and not the others – which is what happened in Tolan’s case.

In its ruling, the Supreme Court said that the courts must review excessive force claims in “the light most favorable to the party asserting the injury” and determine whether the right in question was “clearly established at the time of the violation.” In addition to that, the Supreme Court justices declared that they reached the “inescapable conclusion” that the Fifth Circuit of Appeals made a gross error by giving more credence to the narrative presented by Cotton and his attorney’s and by not delving deeper to properly investigate contradictory evidence.

“This is huge for me, huge for my family and huge for so many other victims of police brutality across this country. This is going to help a lot of people,” said Robbie. “Because we fought against what happened to me, this is now the law. Because of Tolan v. Cotton, the U.S. Supreme Court now says that we can’t get ignored or overlooked anymore in the courts, just because a judge believes that we should be.”

Robbie still walks around with the bullet lodged in his liver from that dreadful day, but since he was racially profiled and shot, he has become a Civil Rights advocate for people who have been oppressed by law enforcement and the judicial system and refuses to allow the incident to slow him down or keep him quiet. He does, however, want people to follow this case closely and support him like never before, because unlike other victims his voice can still be heard.

“I see celebrities, activists and concerned citizens from across the country advocating for all of the martyrs that represent police brutality, but they don’t get behind a man like me whose life has and will impact generations of people for years to come,” said Robbie. “That’s me. I’m still alive. Follow my trial closely and let social media know that there is a person who is still alive and is fighting against a corrupt system. I am alive and can be a real voice for the current and next generation of people who are as concerned as I am with addressing the issue of racial profiling and police brutality in this country. Get behind me. I’m still here.”

The Houston Forward Times will continue to follow this story and give updates on the status of the trial once it begins.

Israel is failing at Racial Politics

Israel is failing at Racial Politics

There is a Black wave sweeping across the State of Florida

There is a Black wave sweeping across the State of Florida […]

Enough with the Racism in the Rooftop Solar Industry

Enough with the Racism in the Rooftop Solar Industry […]