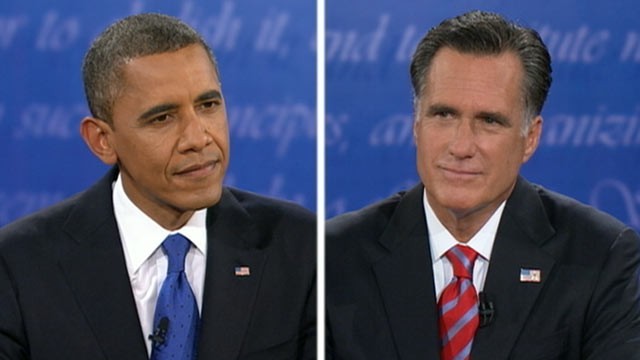 WASHINGTON (NNPA) – What was billed as the third and final debate between President Barack Obama and Republican challenger Mitt Romney on Monday night often featured the former Massachusetts governor agreeing with actions taken by the president on foreign policy.

Unlike his acerbic performance in the earlier debates, Romney agreed with at least a half-dozen actions taken by Obama, including instituting economic sanctions against Iran, wanting Egyptian President Hosni Mubarak to step down, increasing the use of drones, implementing a troop surge in Afghanistan, and supporting the killing of Osama bin Laden.

At one point, Obama said: “What you’ve just heard Gov. Romney say is that he doesn’t have different ideas.”

During the 90-minute debate in Boca Raton, Fla., Romney repeated his charge that Obama had taken an “apology tour” around the world when he first entered office.

The Washington Post fact checker stated: “…it is an article of faith among top Republicans that President Obama has repeatedly apologized for the United States and its behavior. Even more, the argument goes, he does not believe in American strength and greatness. The assertion feeds into a subterranean narrative that Obama, with his exotic, mixed-race background, is not really American in the first place.”

It concluded, “The claim that Obama repeatedly has apologized for the United States is not borne out by the facts, especially if his full quotes are viewed in context.”

The Washington Post awarded the charge four Pinocchios, described as a whooper of a lie.

When Romney mentioned that the United States has fewer naval ships than it had in 1916,   “Well, Governor, we also have fewer horses and bayonets, because the nature of our military’s changed. We have these things called aircraft carriers, where planes land on them. We have these ships that go underwater, nuclear submarines.  And so the question is not a game of Battleship, where we’re counting slips. It’s what are our capabilities.”

Obama repeatedly accused Romney of being “all over the map.”

He specifically criticized the Republican nominee for saying he would have asked Pakistan’s permission before entering that country to hunt down Bin Laden. Obama made no such request before approving the mission that ended with the killing of Bin Laden.

Summarizing his foreign policy accomplishments, Obama said: “We ended the war in Iraq, refocused our attention on those who actually killed us on 9/11. And as a consequence, Al Qaeda’s core leadership has been decimated.  In addition, we’re now able to transition out of Afghanistan in a responsible way, making sure that Afghans take responsibility for their own security. And that allows us also to rebuild alliances and make friends around the world to combat future threats.

“Now with respect to Libya, as I indicated in the last debate, when we received that phone call, I immediately made sure that, number one, that we did everything we could to secure those Americans who were still in harm’s way; number two, that we would investigate exactly what happened, and number three, most importantly, that we would go after those who killed Americans and we would bring them to justice. And that’s exactly what we’re going to do.”

In a shift of tactics, Romney tried to attack Obama from the left, saying the United States “can’t kill our way out of this mess” of religious extremism.

Even though the debate focused on foreign policy, each candidate eased in references to domestic issues.

On one, the bailout of the auto industry, the Washington Post fact checker said: “In the tangled debate over whether the auto industry would have survived under Romney’s bankruptcy plan, Obama has the edge on the argument. This exchange is drawn from a headline — ‘Let Detroit Go Bankrupt’ — on an opinion article written by Romney for the New York Times. But he did not say that in the article. (He repeated the line, however, on television.)”

It continued, “Ultimately, along with getting nearly $80 billion in loans and other assistance from the Bush and Obama administrations, GM and Chrysler did go through a managed bankruptcy. But many independent analysts have concluded that taking the approach recommended by Romney would not have worked in 2008, simply because the credit markets were so frozen that a bankruptcy was not a viable option at the time.”

In one lively exchange, Romney again boasted that Massachusetts students led the nation in standardized test scores for math and reading while he was governor.

The Washington Post fact checker stated, “He is correct, but many educational experts credit the scores to a comprehensive education overhaul that the state began a decade before the Republican presidential candidate became governor.”

It is unclear how much Monday night’s debate will have on voter preferences.

In three battleground states, for example – Colorado, Virginia and Wisconsin – less than 10 percent of voters in each state ranked national security as their top priority. It was considered less important than the economy, the deficit and health care.

Perhaps more important than the topic of the last debate is how each candidate is perceived as a leader.

Vice President Joe Biden said at a rally in Florida over the weekend, “Presidential elections are about character and the character of your convictions, and my guy, he never tells you anything he doesn’t mean and he doesn’t do.”

Various polls show both Obama and Romney with a small edge. However, it is important to remember that state figures are far more important than national numbers because that’s the pathway to victory in the Electoral College where the election is decided.

“The good news for Gov. Romney is that he has sliced President Obama’s lead in Ohio in half in the last month,” said Peter A. Brown, assistant director of the Quinnipiac University Polling Institute. “The bad news for Romney, and the good news for Obama, is that no Republican has ever won the White House without carrying Ohio and the challenger is running out of time to make up the remaining difference.”

The New York Times’popular “FiveThirtyEight” column calculates that Obama has a 67.6 percent chance of winning the Electoral College. Romney is given only a 32.4 percent chance of upsetting Obama. It notes, “These estimates might seem to be incongruous with national polls that show a nearly tied race. But the FiveThirtyEight method is, principally, an Electoral College simulation, and therefore relies more heavily on state-by-state polls.”

Nat Silver, author of the popular New York Times column noted, “There remains an outside chance that the race will break clearly toward one or the other candidate, after the third debate on Monday or because of some intervening news event, but the odds are strong that we will wake up on Nov. 6 with a reasonable degree of doubt about the winner. For that matter, we may wake up on Nov. 7 still uncertain about who won.

“Nonetheless, stipulating that the race is clearly very close is not an adequate substitute for placing any kinds of odds on it at all. And the central premise behind why we see Mr. Obama as the modest favorite is very simple: he seems to hold a slight advantage right now in enough states to carry 270 electoral votes.”

I will start with the bottom line and the reasoning of Mitt Romney’s policy decisions. The Senate Republican party refuses to agree to bi-partisanship with the House Democrats on President Obama white House Policies. It is no wonder it is said that the President has done nothing to change the old way of doing business in congress. […]

President Obama makes the final push in his last campaign — a nonstop sprint to the finish starting with grassroots events in Madison, Wisconsin and Columbus, Ohio. For the final stop, the President and First […]

Obama urges nation to come together for holiday

By: Associated Press President Barack Obama is urging Americans to put aside partisan differences and come together as a nation for Thanksgiving. Obama, just re-elected to a second term, says in his weekly radio and […]