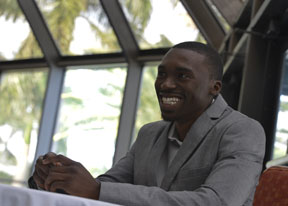 New Broward Teachers Union Secretary, Roosevelt McClary III, handles the historical weight of his August 2016 win with admirable humility. The youngest and first Black Secretary of BTU, McClary is entirely focused on the lives he could serve, a theme that dominated our conservation. He represents an emerging leadership in Broward County that refuses to disconnect from their roots and stories, consumed with the urgency of their work and what they represent to youth.

Prior to our meeting I envisioned McClary a stereotypical leader of the old guard, complete with business suit and tie, eager to expound upon his accomplishments, awards, and goals for the future. However, I was greeted with an individual blessed with a welcoming air of informality, dressed in jeans and at ease. McClary had just left Lauderdale Lakes Middle School where he continues to serve as a Behavioral Technician despite occupying BTU’s Secretary seat. It is just one of the many pieces of evidence demonstrating McClary’s unconventional leadership style; never before has a BTU Secretary maintained a part-time position with a school. His continued engagement with students and the classroom has the potential of reshaping the expectations and roles of future BTU executives.

“I love my job as a Behavioral Technician,” McClary tells me, “It keeps me connected to the kids. I don’t want to leave them.”

McClary’s commitment to the youth of Lauderdale Lakes Middle goes deeper than professional responsibility. He sees himself in them. A Broward native hailing from Fort Lauderdale’s Oriole Estates, McClary grew up in an environment rife with opportunities to make regrettable choices. He has his own story to tell.

“I didn’t make the right decisions,” McClary recounts, “My life was very similar to the students I work with.”

It was not until the arrest and imprisonment of one of his closest friends that McClary realized his choices would guarantee incarceration.  He then embarked upon a journey to radically transform his behavior and thinking. He calls this process “positive mind development”.

“It was important for me to surround myself with positive people and think positive thoughts,” McClary explained, “Then, I started to strengthen positive decision making skills that began to change my life.”

He soon took a job with the YMCA where his passion for youth development was first ignited, afterwards transitioning to work with Broward County Public Schools as a class-room assistant and, finally, a beloved Behavioral Technician.  It was here McClary was able to make first-hand observations on the state of public education, becoming inspired by students and teachers to act and question an antiquated educational process. After the birth of his daughter, now five years old, McClary became determined to expand his reach and aspired higher.

“I am committed to fighting for what’s best for the next generation,” McClary explained, “When my daughter was born, my fight for education became personal. I ran for a BTU position before, but was denied.” A shrug. A smile.

His casual treatment of a former defeat was striking. It demonstrated his perseverance in the face of adversity and an acceptance of a temporary set-back, for his current seat ranks higher than the one he ori-ginally sought.

“You never know what God has in store for you.” He stated.

What took others 10-15 years, McClary accomplished in six, making his transformation from reckless youth to influential Secretary an extraordinary ascension story Broward youth must hear. McClary seeks to emphasize to youth the dramatic effect of surrounding oneself with positive, forward-moving, and ambitious people. He desires to represent for youth the serious importance of changing one’s mindset from hopelessness to hopefulness. According to him, these are necessary and available ingredients for success.

But what about the role of education in success? What can our public education system do to ensure youth have the necessary skills to be great? Of course, McClary’s answer advocated for the essential role of the educator.

“Teaching is not evolving with the times, “McClary responded, “Because of over-testing, our public education system restricts teacher creativity and innovation. Now, our children lack critical-thinking skills and students are not thinking for themselves. And as a result, positive decision making skills suffer.” In response to this reality, McClary feels it is his responsibility to be accessible and open with his story and hopes to acquire opportunities to talk to youth struggling in their day-to-day lives. He feels compelled to stand in the gap and encourage them to strive for greatness.

Naturally, given the hot political climate, the historical importance of being the first Black BTU Secretary, and the approaching Black History Month, our conversation turned to racial issues and how Blacks can assert themselves into the national dialogue. I asked him to share his perspective on the state of the Black community and what his win represents.

“Do you really want to know?” he asked. His response definitely piqued my interest.

“There is an African proverb that says ‘If there is no enemy within, the enemy outside can do you no harm’,” McClary explained, “I think the Black community has been indoctrinated with self-hate. If we do not love each other, how can we expect others to respect us? Black people have an incredible amount of healing to do. We have to stop Black-on-Black crime and build self-love and self-respect.” The critique came out like a flood. It was obvious he was passionate about his stance and fully open to serving as a vehicle for the much needed inner healing of the Black community. With such a strong position, I asked if political aspirations were in his future.

“Absolutely,” he responded, “As the BTU Secretary I have had opportunities to meet Broward’s leadership and I am inspired by the possibility of changing lives on a broader

The much acclaimed feature-length film, “Pardons of Innocence: The Wilmington Ten,” will have its national debut during the CBCF Annual Legislative Conference this Friday, Sept. 26 at the Renaissance Hotel across from the Walter E. Washington Convention Center in downtown Washington, D.C. […]

Walking away from bad customer service

Walking away from bad customer service
[…]