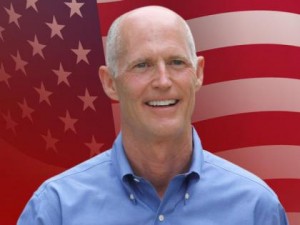 THE NEWS SERVICE OF FLORIDA

THE CAPITAL, TALLAHASSEE, January 17, 2013….Gov. Rick Scott said Thursday that up to 14 days of early voting should be offered during the next election in Florida, an effort to reduce long lines experienced this past November – that would be a reversal of course for Republicans.

Scott signed a bill two years ago shortly after taking office, that reduced the number of early voting days from 14 to eight. But he said in a statement Thursday that he is recommending to the Legislature – still overwhelmingly Republican – that they allow local supervisors of elections to determine the number of early voting days but that as many as 14 should be allowed.

“Our ultimate goal must be to restore Floridians’ confidence in our election system,” Scott said.

Scott’s recommendations aren’t a total surprise – he has said since shortly after Election Day that the shortened number of early voting days may have played a part in problems and that lawmakers should look at whether that needs to be changed. Scott’s formal recommendation comes after the state Division of Elections did its own review and a number of local elections supervisors said that more early voting days would have reduced long lines on the actual Election Day. Some voters reported standing in line as long as seven hours in Miami-Dade County to vote.

The increase in early voting days was recommended by Secretary of State Ken Detzner, whose office oversees the Division of Elections, and who reviewed Election Day problems for Scott.
Scott also recommended on Thursday allowing more and larger early voting locations. Several supervisors have complained that they didn’t have enough voting spots in places where turnout was heavy, and that the law is too restrictive on where they can hold early voting.

In another recommendation, Scott said lawmakers should also try to reduce the length of the ballot by limiting how long the description of proposed constitutional amendments can be.

Several supervisors and others have said voters took longer than usual to vote this past year because they had to wade through 11 proposed constitutional amendments – some of which had long summaries, or weren’t summarized at all, but put onto the ballot in full. Legislators previously limited to 75 words the length of ballot summaries for proposed citizen initiatives, but didn’t bind themselves to that limit.

Elections supervisors from around the state have been in Tallahassee this week and their testimony to lawmakers on how to make the experience easier for voters was generally the same as what Scott recommended Thursday.

Seminole County Elections Supervisor Mike Ertel told lawmakers that voters will easily be able to understand shorter descriptions of what proposed amendments do.

“If we can elect a president of the United States based only on his or her first and last name, I believe we can administer amendments with 75 words,” Ertel said.

The head of the state Democratic Party dismissed Scott’s proposal as pre-election year pandering on a position likely to be popular in areas where people waited in line.

“Gov. Rick Scott continues to lead from behind, breaking our elections system in 2011 and making our state a national embarrassment in 2012,” said Democratic Party Chairman Rod Smith. “Heading into an election year, Scott is attempting to distance himself from his actions, which have hurt Florida voters and underscored that he simply can’t be trusted.”

Scott’s proposal, particularly on early voting, may also be met with mixed reaction by Republicans, who have spent the last several years resisting efforts to increase the ease with which people can cast ballots. They’ve said that fraud is the primary concern, as well as cost, and the notion that at essence, there must be some limits on how far the state should go in making it easy for everyone to vote.

Political observers have noted, however, that Democrats have mostly pushed for more opportunities to vote, believing that they benefit from easier access to the ballot.

Groups that have pushed for easier ballot access generally praised the governor’s recommendation.

“These steps are essential to helping us put Florida’s elections fiascoes behind us once and for all,” the League of Women Voters said in a statement. “It is imperative to not only restore citizens’ confidence in our electoral process, but also to show America that Florida can be synonymous with excellence in elections. We applaud the governor for taking a critical first step, and we now look to the Florida Legislature to do their part to protect our state’s democracy.”

In recommending giving supervisors flexibility to hold between eight and 14 days of early voting, it’s possible that in some counties there would be no change, even if a bill did pass. Local supervisors of elections are elected – except in Miami-Dade County where the supervisor is appointed by the county’s mayor.

Less restrictive requirements on voting were credited – or blamed – by some in 2010 for helping President Obama win in some communities where turnout far exceeded what had been seen in earlier elections, particularly in African-American communities.

By MICHAEL PELTIER THE NEWS SERVICE OF FLORIDA Posting or forwarding this material without permission is prohibited. Contact news@newsserviceflorida.com. THE CAPITAL, TALLAHASSEE, January 23, 2013…..Gov. Rick Scott on Wednesday called on state lawmakers to give every […]

By JIM SAUNDERS THE NEWS SERVICE OF FLORIDA THE CAPITAL, TALLAHASSEE, October 26, 2012………A federal appeals court will hear arguments next week in a battle about a 2011 Florida law that would require people to […]

Scott: Florida opt out of parts of health care law