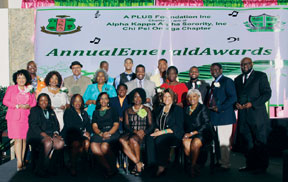 Seated are all members of A Plus Foundation, Inc. with Luwando Wright-Hines, president. Standing are the church musicians/choral directors honorees.

More than 200 were in attendance to celebrate this grand occasion honoring these individuals for their outstanding work and dedicated service to the community; too often not recognized for their efforts.

Minister Vicki Flournoy of Mount Bethel Baptist Church served as Mistress of Ceremony. During the luncheon, participants enjoyed and raved about the musical talent and selections by Randy Corinthian of RC Music Group and Co-DJs, Richard and Thesea Ingram.

The foundation also presented many of its scholarship recipients to the community; facilitated by Emma H. Kurtz. The majority of the winners selected this year will be attending Historically Black Colleges and Universities (HBCUs.