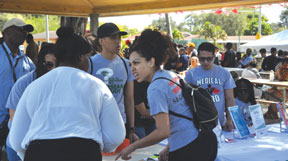 Broward and Miami-Dade County residents participate in festivities during annual medical hereo luncheon, which was hosted by Segal Institute at MLK Park in Liberty City.  (Photo by Derek Boyd)

That’s what U.S. Army Veteran Eric Davis and others like him have been doing by participating in clinical trials at the Segal Institute for Clinical Research to find a panacea to help other members of society along with themselves suffering from a debilitating condition.

“The Veterans Affairs was giving me prescriptions that made me become addicted to opiate-based narcotics,” said Davis during the Segal Institute Annual Medical Hero Luncheon, which was held Friday at Martin Luther King, Jr. Memorial Park in Miami. “I was taking 10-15 pills daily. I was eating them like candy.”

Davis says that he became acquainted with Segal so he could stop taking the pain pills that were issued to him from the VA, and since he’s been enrolled in their program, he can’t take pills with narcotics.

“I’m still in pain, but at least I’m no longer addicted to narcotics,” said Davis. “Segal is giving me alternative medication for my pain. I come in once a month to get my injection.”

Segal Institute for Clinical Research conducts studies for most central nervous system disorders such as depression and Post Traumatic Stress Disorder (PTSD) and addiction disorders for cocaine and opiates.

Their success is based largely on the extent of patients seen by the clinicians at its sister company – Compass Health Systems , which according to their website, is the largest provider of mental health services in each of the communities they serve.

To date, Segal’s very extensive HIPAA-compliant patient database has grown to over 20,000 patient, and that’s very good news for someone like Krystal Rodriguez who’s interested in becoming a participant.

“The clinical trials are very safe and nothing happens to our patients,” said Lynn DeVito, Clinical Rater for Segal. “The FDA monitors our site. The participants can quit at any time.”

Rodriguez, 28-years-old, has been struggling with a Bipolar Disorder and Depression since her teenage years and travelled all the way on public transportation from Homestead to sign up with Segal’s clinical studies.

She takes her daily medications and visits her therapist regularly but isn’t quite satisfied with her results.

“I came to the event to participate in the research,” said Rodriguez. “I hope they can come up with a better cure for my illness.”

Participants are actively wanted and may be eligible to receive compensation up to $3,950 – transportation – evaluation by a physician and a medical diagnostics for a clinical research study in the areas of Depression, PTSD, Birth Control and many more symptoms.

There are even studies being carried out for ADHD in both adults and children and no insurance is required in any of the clinical trials.

Many drugs and treatments prescribed to children may not have been studied in children consequently; clinical studies are conducted to see if a study medication, therapy or device is safe and effective for children to use.

To protect the rights and welfare of children participating in clinical studies the FDA and the National Institutes of Health (NIH) oversee much of the medical research administered by Segal.

Segal has locations in Miami-Dade and Broward Counties and to find out additional information on being a participant for a paid clinical research study call 1 (877) 734-2588.