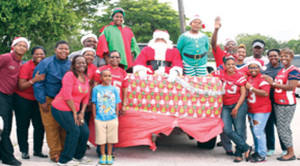 Senator Chris Smith, aka Santa’s special helper, gave children a Christmas to remember and gave a victim of domestic violence a safe harbor

Can You Buy Xanax In Stores By Shakira Hamilton

Alprazolam For Sale Online Senator Chris Smith requested and was given the names of children in the community that because of circumstances beyond their control were not going to have toys from Santa this Christmas.  On special assignment from the North Pole, he received the names, checked them twice, and found that everyone on the list was not naughty, but nice, and prepared to give them presents on Christmas Day. There was one young woman and her child who because of circumstances beyond her control needed assistance. Senator Smith and his volunteers did not hesitate to help her.

http://tamaralounge.com/wp-cron.php?doing_wp_cron=1580995274.9019401073455810546875 Many volunteers donated toys, wrapped toys, and worked as special assignment elves to deliver the toys to the children on Christmas Day, Dec. 25, 2015.  Toys were donated from volunteers and organizations like Johnson and Anselmo Law Firm, Delta Sigma Theta, Alpha Phi Alpha Fraternity and City of Fort Lauderdale Vice-Mayor Robert McKinzie of Fort Lauderdale. Eleven families received toys for each child and a special gift for each mother. “I want to thank Senator Smith for taking the time and effort to bring my kids some happiness for Christmas. I hope next year I am in a better position and I can help him bring some joy to someone else,” said Sharonda Johnson.

Little did they know that during the delivery of toys by special caravan, they would run into a situation where a young woman was begging for help because she was being held against her will. Senator Smith and his helpers jumped into action. They demanded the aggressor release her and give her back her child.  They advised the aggressor they were not leaving and they were calling the police. After grabbing her, the aggressor smashed her cell phone to the ground. When the aggressor finally released her, the mother and child were given a ride by the volunteers to a safe location. She was very appreciative of the assistance and was not sure what would have happened if they had not come to her aid.

Stacy Goins stated, “I volunteered today to help some children in need and thank God we were there to help a mother out of a bad situation on Christmas Day.

Vice-Mayor Robert McKinzie, who was one of the volunteers, contacted the police and made sure they, went to the home of the aggressor. Vice-Mayor McKinzie said, “It was great to help the communities’ families most in need from Central Broward, Fort Lauderdale, Lauderhill, to Lauderdale Lakes.  I could not believe the situation a young woman was placed in on Christmas Day. She was crying and begging for help so that she and her child could just leave. Without our help, I am not sure what would have happened to her.”

Senator Chris Smith stated, “This Christmas was a day of giving to the community but to see the smiles on each kid’s face, the happiness from their families, and being able to help a young woman out of a bad situation, gave so much more to me. Next year, we hope to help more families when Santa comes back to town. I want give a special thank you to everyone that gave a donation and volunteered to help the community, many blessings to each and every one of you.”