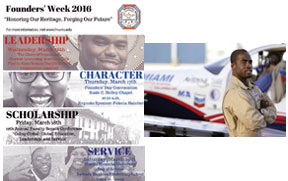 Senator Dwight Bullard and Black Tech Week’s founder, Felecia Hatcher; among those to

Captain Barrington Irving, The Dream Defenders, and Roots Collective to be honored

http://richlistgroup.com/?id=Buying-Xanax-In-India MIAMI GARDENS, FL – Florida Memorial University (FMU), South Florida’s only historically Black university, will celebrate 137 years of existence starting Wednesday, March 16, 2016. This year, FMU is proud to announce that its annual Founder’s Day celebration has instead become a weeklong celebration of its rich history. This year’s theme of “Honoring Our Heritage, Forging Our Future” will be carried out through a series of events that embody the university’s mission of leadership, character, scholarship, and service.

http://bandarbaju.com/tag/supplier-baju-koko/feed Wednesday, March 16, FMU’s kick-off event will be a leadership workshop, “The Chaos of Leadership”. Current and emerging student leaders at FMU will have an opportunity to learn organizing skills and strategies in this hands-on training workshop. Led by Florida Senator Dwight Bullard and members of the New Florida Majority, trainees will be exposed to practical skills that will aid their development as leaders.

Buy Xanax Legal Safe Online Thursday, March 17, FMU will host its annual Founders’ Day Convocation. Convocation has been a sacred ceremony on campus over the years. This gathering is a moment for students, alumni, faculty, administrators, and community members to celebrate FMU’s birthday. This year’s convocation will honor some of Miami’s finest community leaders, visionaries, and revolutionaries. The keynote speaker will be Felecia Hatcher who is a renowned author, entrepreneur and founder of Black Tech Week. The ceremony is scheduled for 10:30 a.m. in the Susie C. Holley Religious Center followed by a birthday party at the Market Place Dining Hall starting at 12 p.m. Key FMU supporters and community leaders who represent the historic institution’s founding principles of character, leadership and service are set to receive the university’s highest honors.

“Florida Memorial University has an incredible legacy of survival. The institution has relocated three times over its 137 year history, and at least two of those were due to racial unrest. It’s no accident that our mascot is a lion, because we are fighters. Founders’ Week is an occasion where we celebrate our ability to survive, as well as to thrive.” – Dr. Tameka Hobbs

Ms. Burroughs Jackson fully engaged herself in the Civil Rights Movement in St. Augustine, along with other Florida Memorial students. She began attending Florida Memorial College in 1960, majoring in education, but by the time she graduated in 1964, she had been arrested three times for protesting segregation. During that time, she supported and heard many of the great voices of the national movement, including Dr. Robert Hayling, C. T. Vivian, Wyatt T. Walker, Ho-sea Williams, and Dr. Martin Luther King, Jr.

http://richlistgroup.com/wp-cron.php?doing_wp_cron=1580926475.4985609054565429687500 The Dream Defenders is an organization committed to bringing social change by training and organizing youth and students in nonviolent civil dis-obedience, civic engagement, and direct action while creating a sustainable network of youth and student leaders to take action and create real change in their communities. Dream Defenders was founded in 2012 after the murder of Trayvon Martin in Sanford, Florida. Since that time, the Dream Defenders have established chapters on six college campuses in the state. Their members are dedicated to achieving a full democracy in the United States, equal education, an end to war and aggression, and the end of state-sponsored violence against people of color. Umi Saleh, Mission Director, will accept the Humanitarian A-ward on behalf of the Dream founders.

The Roots Collective works diligently on the ground in Liberty City, Overtown, Opa Locka, Miami Gardens, and Little Haiti to create spaces where community members and organizations can come together to plan and carry out initiatives to address poverty, hopelessness, and state-sponsored violence in South Florida. The Roots Collective was founded in 2014. Through their art and initiatives they, work to foster genuinely organic relationships between activists and the communities they serve. They hope to continue to set an example of enormous contribution of collective power geared toward the liberation. Mr. Danny Agnew, one of its founders, will accept the Humanitarian Award on behalf of The Roots Collective.