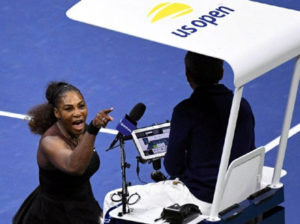 This is not a sports story, it’s a morality play. The game of tennis is less about a racquet and a ball than it is about classism, racism, and patriarchy.

Derived from the recreational pursuits of kings, Louis X of France and later Henry VIII of England, tennis now represents American society in a microcosm. It still carries with it the cachet and pompous self-importance of it’s aristocratic roots, although the game enjoys popularity across the board.

Not rich? Not White? Not male? Good luck to you in the snooty world of professional tennis. How many doors has Ms. Williams had to kick down, which would have been held open in welcome to a White male player? Her success, in reality, is two-fold. Her athletic skill is just one, perhaps even the lesser, component. Sheer perseverance should be the trophy sport.

For those who characterize Serena’s outburst as poor sportsmanship (sportswomanship?) in challenging the umpire this weekend at the US Open, hark back a few decades to John McEnroe. A good player with anger management issues, prone to histrionics on the court, McEnroe routinely got away with his numerous dramas. A wink and a nod, and White male privilege manages to duck the rules. Playing with decorum is obviously desirable, but don’t expect any rule-bending or special dispensations for the peasantry. This is one more example of the double standard that women and people of color face on a regular basis.

Serena may have been docked a game, costing her the match and title, but she showed her true colors once the fit of pique passed. In a gracious and generous display of humanity, she congratulated her opponent and begged the crowd to stop booing. Tennis is more than a game for her, it’s a political stance. She plays for the non-aristocrats among us, and suffers the insults so that future generations might avoid them. This incident served to expose the inequalities, big as life, to an audience of thousands in the stands and on national TV.

THAT is how you win while losing!