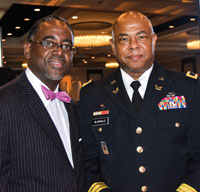 The U.S. Army continues to partner with 100 Black Men of America

Brigadier General Ural Glanville congratulates Marvin Dickerson, the National President of the 100 Black Men of America, Inc., on their 60th National Convention. General Glanville said “We are here (U.S. Army) because the Army shares the same mission as the 100 Black Men of America: preparing our youth to be the next generation of leaders. Personally, I enjoy mentoring young people and what I see here is an organization that cares about the youth and values education.” 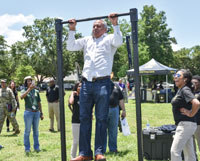 Marlin N. Gusman, the Sheriff of Orleans Parish, joined in the U.S. Army activities by performing several pushups at the 100 Black Men of America Community Empowerment Day. The activities took place at the Alice M. Harte Charter School at 5300 Berkley Dr., New Orleans, LA. The community engagement theme was “Growing Healthy, Wealthy and Wise.” The goal of the event was to build a project which will last beyond the conference and continue to benefit the community. 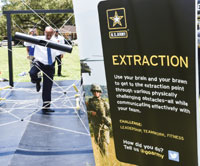 Brian Pauling navigates the Army Extraction course. The goal of the 100 Black Men of America and the U.S. Army is to build a project which will last beyond the conference and benefit the community. Activities included building a community garden, having a local STEM activity and health screenings. 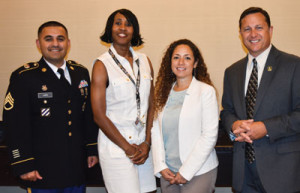