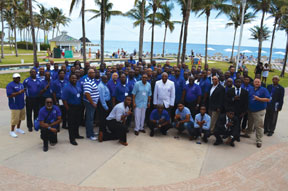 Almost 300 guests attended the Ministry of Tourism/Phi Beta Sigma Southern Region Collegiate Awards Luncheon April 8, 2017 at the Grand Lucaya Pavilion. The fraternity awarded collegiate members of the fraternity awards in Social Action, Education, Bigger Better Business, outstanding chapter reporting and many other categories.  Alumni chapters were also honored.  The two top teams in the region for debate and oratory competed at the luncheon as well.  The Bahamas won both categories. More than 300 guests attended the annual conference held in Freeport.

FREEPORT, BAHAMAS – The Southern Region of Phi Beta Sigma Fraternity Inc. took over Freeport for the annual conference bringing in a much needed economic boost for the island.

More than 300 brothers, wives and guests attended the conference held at the Our Lucaya Convention Center April 6-9, 2017.  The Ministry of Tourism and the Minister of Tourism Honorable Obie Wilcombe were integral in bringing the conference to the island.

“Minister Wilcombe fully supported this conference on the island which is only the third time that we have held the conference outside of the continental United States,” said State Director for The Bahamas in the fraternity Christopher Saunders. “Many of our brothers and guest got a passport for the first time to attend this conference and we wanted to make sure they had a good time.”

It is estimated that the group injected close to $200,000 into the island’s economy.  Both the Lighthouse Point and Pelican Bay resorts were sold out for the weekend.

“But more importantly we were thinking about the adage that if a visitor gets some sand in their shoes they are bound to return to The Bahamas,” Brother Saunders added. “Thanks to the ministry’s help I think we got a lot of sand in a lot of shoes over this weekend.”

“That gave us a great feel of the islands,” said Southern Regional Director Roy Edmunds. “From the junkanoo of the opening ceremony, brothers had a great time here on Grand Bahama Island. Brothers can’t stop talking about the great time they had over the weekend.”

Over the weekend the U.S. based fraternity set its agenda for the next year on how to support the community. The organization’s thrust includes social action, education and bigger better business.

“In between the fun we got down to business and we were able to make sure all of our chapters are ready to impact our communities in meaningful ways.  That’s the most important reason we are here this weekend.”

The annual conference is rotated through the states of the Southern Region of the fraternity—Alabama, The Bahamas, Florida, Georgia, and Mississippi. The region will host next year’s conference in Savannah, Ga.

Phi Beta Sigma Fraternity was founded at Howard University in Washington, D.C., January 9, 1914, by three young African-American male students. The Founders, Honorable A. Langston Taylor, Honorable Leonard F. Morse, and Honorable Charles I. Brown, wanted to organize a Greek letter fraternity that would truly exemplify the ideals of brotherhood, scholarship, and service. The Founders deeply wished to create an organization that viewed itself as “a part of” the general community rather than “apart from” the general community.

On Saturday, January 12, 2019, at the Rosen Centre Hotel, Orlando, Florida, the Phi Beta Sigma Fraternity Inc., (Gamma Delta Sigma Chapter), celebrated its 105 years of service at their “Founders Day Gala.” The most striking and beautiful image of the brotherhood is their Royal Blue jackets that leaves an indelible mark the first time the brothers are seen together. […]