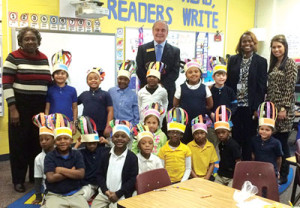 Sixteen states and the District of Columbia turn in ESSA plans

http://audiodescription.co.uk/about/about-audio-description/ Sixteen states and the District of Columbia have submitted plans for implementing the Every Student Succeeds Act (ESSA) for the spring peer review window, the U.S. Department of Education said this month.

While other states continue to work on submitting their plans, officials in Georgia said they’re prepared to complete the process early next month and are excited about the goals outlined under ESSA, which was one of former President Barack Obama’s top priorities.

“ESSA allows us to be flexible with how we spend funds,” said Georgia State Schools Superintendent Richard Woods. “This will help school systems draw down on the money that they’ve been given and it allows a more personalized approach to education.”

http://boldmarketing.com/tag/events/ Woods has organized several committees in his district to ensure the success of ESSA, including an accountability committee that will look at Georgia’s platform, the College and Career Ready Performance Index, and help make refinements to the model by taking what he called a responsible approach to accountability and finding a way to represent school performance in a public friendly manner.

http://naturesown.co.za/wp-cron.php?doing_wp_cron=1580917200.1414060592651367187500 “First and foremost, the difference between ESSA and the previous No Child Left Behind law, is really a reflection of the federal government providing states with the flexibility to address things at the local level,” Woods said. “Our proper role is to help school systems at the local levels and focus on the children. The result should be less cumbersome and burdensome for districts and schools, while still providing an accurate assessment of student achievement and school quality.”

Cheap Xanax China The District of Columbia, Arizona, Colorado, Connecticut, Delaware and Illinois were among those who turned in their plans early to the federal government.

Education Secretary Betsy DeVos said that the announcement about the ESSA state plans that were submitted for the spring deadline and the fact that they were ready for peer review was “a big win for ESSA implementation.”

The Education Department worked with states to ensure their plans included all statutorily required components laid out in the Department’s template, DeVos said.

http://cnt-aranjuez.org/?s=진해출장시『카톡:+Mo46』『Po+o34.c０M』출장소이스홍성출장미인아가씨Y┒➹2019-02-21-00-38진해↠AIJ♡외국인출장만남출장여대생콜걸출장안마↥미시출장안마∷콜걸출장안마☣진해 “I commend officials from these states for their efforts to ensure their plans were ready for the peer review process, and for their continued work to improve education for all students,” she said.

Experts and stakeholders will now examine the submitted plans to ensure they comply with the standards established in ESSA.

http://grosirrumahan.com/produsen-baju-anak.html Of the states that have turned in plans, Nevada is believed to have one of the more progressive programs.

The Silver State lists at the top of its goals the development and support of “great school leaders,” using data to inform decisions impacting Nevada schools. The district’s ESSA plan aims to take advantage of the return of authority and flexibility to set policies they believe make sense.

http://artists-atelier.com/category/blog/postcards “It’s in their hands now,” Nevada Superintendent of Public Instruction Steve Canavero said of turning into the government the state’s ESSA plans.

Alprazolam Online Cheap “We believe that a focal point to our plan is really the important goal of equity and insuring that all students deserve an opportunity. This only enhances our commitment,” Canavero said. “I propose using ESSA as a catalyst for improvement and an opportunity to rally the state behind the singular goal of becoming the fastest improving state in the nation.”

To achieve that goal, Nevada’s plan proposes to continue its “Zoom” program for English learners that leads to improved student achievement and the expansion of advanced coursework such as Advanced Placement which has led to the state being the fastest improving in the nation for scores of three or higher.

Nevada’s Zoom program counts as an on-line elementary school classroom with lessons in geography, biology, language arts, and early childhood activities; the program is the result of extensive research by state officials into intensive efforts to help ELL students.

http://learnwithojo.com/product-category/price/15-20-pound/?add-to-cart=1777 Gov. Brian Sandoval identified English Language Learner (ELL) programs as one of his top priorities and included money for those programs in his budget. The governor’s 2017 legislative agenda calls for expanding existing Zoom funding by $42 million.

“Now that we’ve seen data and the plan is there, now it’s our obligation,” Canavero said. “The governor has instituted help resources and, in our state, we have urban poverty and rural White poverty that is within the urban core. Now, we have additional dollars to help provide the needed resources for success.”

59c65ecc82d8c077284d9b7d4b551316      We sons observe our fathers in awe at first, because of the size differential. But as the luster of the bluster wears off, sons see exactly what kind of man their fathers are by the way they treat and care for the women in their lives – their wives, their sons’ mothers, other relatives. […]