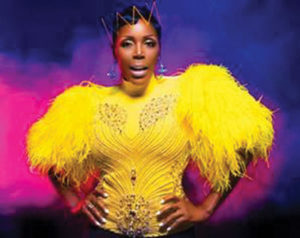 MIAMI, FL— The ground-breaking, multi-talented, classy and sassy and always entertaining comedian Sommore is returning to Miami Beach at the Faena Theater Friday and Saturday June 1-2, to host “Sommore’s Chandelier Weekend Takeover” self-produced by Sommore herself, will surely light any room.

This Friday evening, Sommore will be hosting and presenting a few of her favorite comedians during a live taping of her set titled “All the Queen’s Men.” Following on Saturday, she will be shooting her fourth self-produced comedy special, “A Queen With No Spades,” slated to air on prime-time network television fall 2018. Attendees should expect nothing less than the sass and class that have crowned the stand-up comedian as one of America’s top comedic female entertainers of today. Sommore is, as Oprah Winfrey herself declared her, “a force to be reckoned with in the new millennium.”

The New Jersey native was the first woman to host BET’s “Comic View” and later Russell Simmons’ “Def Comedy Jam” and “Showtime at the Apollo.”

If Sommore was an adult drink, she would be served straight with no chaser. Her stuff is up front and real personnel. This unbashful personality brings fresh comedy uniquely hers, which, respective to her comedy, is courageous and an often controversial touching on subjects from male sexual performances or lack thereof to other not so pleasant topics, like that ah person in the White House.  Using her hilarious wit, exceptional intelligence, and a style that is truly all her own, Sommore’s stand-up act is a can’t-miss in comedic entertainment.

I had the opportunity to ask a few questions to the World Record holder, ‘The Queen of Comedy’, recently as she is get-ting ready to show off her, “All the Queens Men” and her self-produced comedy special, “A Queen With No Spades,”

It’s not too often that you get the chance to speak with a Guinness Book World Record holder. In 2000, she entered The Guinness Book of World Records when she performed for an audience of more than 50,000 people in Atlanta as part of the Queens of Comedy tour. The recording of the show became the longest-running and highest-rated special in the history of Showtime Networks.

Sommore: Anyone who knows anything about Standup comedy knows that there is a difference.  Standup comedy is about taking an audience on a journey by provoking thought, giving your own perspective and implementing humor.

WSG: Concerning up and coming comedians, what would you suggest they do to get out there?

Sommore: Standup comedy is pretty much an individual art form, and because of the internet a lot has changed. There are no rules. What worked for some may not work for others, so my only suggestion would be…. Be Funny!

WSG:  You’ve done a lot since you  came on the scene after graduating from a HBCU, Morris Brown College in Atlanta, to DEF Comedy Jam, what will be different about this show that you have produced compared to the other four that you did?

Sommore: “A Queen With No Spades “will be commentary a-bout the world we are living in today. Life is ever changing and so are my jokes. The world of Trump, living life as a grown ass woman and the “me too movement”.  My audience will see a much wiser and mature Sommore.

WSG: In the words of Oprah Winfrey, are you still the force to be reckoned with in the new millennium?

Sommore: I’ve been a force since day one… I have a very unique talent. I am not only a comedian but a business woman as well. I have self-produced my own comedy specials. I have headlined my own comedy tours and I have also employed other comedians. I am a comedian who knows, understands and loves the art form and the business of Stand-up. After all, there is a reason  “The Queen Stands Alone” and “The Reign Continues “.  Yes Sir “ I am Sommore, “The One Chandelier”!

WSG: Last but not least, is there a comedian that you would allow to compare themselves  to you. If so, who would that be and what’s the reason?

Sommore: There ain’t no comparison, and I have never compared myself to anyone. However, as an artist, I’m sure she is somewhere in the lab…why wouldn’t she be!

The “Queen of Comedy” is coming back to sunny south Florida at the luxurious Faena Theater. Inspired by Europe’s grand opera house and the glamorous allure of Old Hollywood, the intimate gilded theatre is the perfect setting to showcase Sommore’s highly anticipated comedy special. The incredibly witty comic is beyond excited for the weekend takeover. Tickets are available now for all shows, starting at $40.00 per ticket.

Sommore’s performances of “All the Queen’s Men” and “A Queen with No Spades” will be filmed at the Faena Theatre, Miami Beach, Friday and Saturday June 1-2, 2018. Showtimes are 7:30 p.m,. and 10 p.m. both evenings. For more information on the comedic sensation and to purchase tickets, call (754)229-1016 or visit www.sommoretakeover.eventbrite.com.

Religion and the Struggle for Racial Justice: Black History Month

In the era of slavery, some voices used the Bible to justify the capture and sale of human beings, arguing that “God set different Orders and Degrees of Men in the World … some to be High and Honorable, … some to be born Slave, and so to remain during their lives.” […]