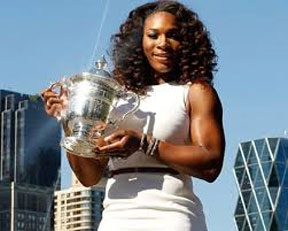 Soul of the US Open: Serena Williams

The world’s most attended sporting event (one million fans expected this year) has officially begun. The top tennis players in the world from both the ATP and WTA tours, 128 total from each organization, have all ascended on New York City to fight and scrap for arguably the most rewarding prize of the tennis season, the 2014 US Open trophy.

The US Open, the last of the four annual Grand Slams, is held at the Billie Jean King Tennis center in Flushing Meadows-Corona Park and is considered by many of the players as the most challenging to win. The fans are rowdy and obtrusively passionate, planes continually fly overhead disrupting concentration, and the weather is wholly unpredictable – from intense heat to intermittent rain, making for a tumultuous road to the finish line.

Only the strong survive.

And speaking of strong, lead

ing the field on the women’s side as the number one seed, defending champion and 2014 United Emirates US Open series winner is Serena Williams. The 17-time Grand Slam champion’s resume’ speaks for itself, but on her way to amassing that impressive number of Slam wins, she’s conquered New York five times. She’ll open this year’s bid against fellow American Taylor Townsend, a former US Open junior champion whose expected to be among the WTA elite in the future.

Serena Williams is coming into the week riding a wave of momentum. After a disappointing year of Slam performances thus far and a zany 2014 Wimbledon bid, she turned things around by winning “Road to the US Open” tune-up titles in Stanford and Cincinnati and by reaching the semifinals in Montreal before being taken out by her surging sister, Venus Williams. Her recent turn in fortunes also earned her a chance to win an additional one million dollars in prize money if she’s the last woman standing at the end of these next two grueling weeks.

On the men’s side, in the absence of last year’s champion and world no. 2, Rafael Nadal, Novak Djokovic will lead the field as the current ATP world no. 1 and the tournament’s no. 1 seed. Djokovic currently owns a single US Open title and is looking to claim no. 2 to cap off a topsy turvy season that has some questioning his resolve. He’ll open the 2014 US Open against Argentinian, Diego Schwartzman to begin proving one way or the other.

Novak Djokovic’s fortunes haven’t been so great in 2014, coming into the week having been bounced early in his most recent tournament, leaving him very little match-play preparation for this last push of the season in terms of Grand  Slams.

In his favor, however, is his ability to grind his way to Slam finals despite performance otherwise and the fact that the man he’d typically meet on the other side of the net of a final, Rafael Nadal, is out nursing a wrist injury he sustained during practice. As a result, Novak becomes this year’s favorite by default.

There are a number of dark horses, sleepers and “favorite adjacents” on both the men’s and women’s sides, including Venus Williams, Petra Kvitova, Maria Sharapova, Victoria Azarenka, Sloane Stephens, Eugenie Bouchard, Simona Halep, Andy Murray, Roger Federer, Milos Raonic, Stan Warwrinka, Jo-Wilifred T-songa, Tomas Berdych, Grigor Dmitrov etc, who all have their compelling narratives, but most bets are on the number one seeds on both sides.

MADRID — Serena Williams overpowered Victoria Azarenka 6-1, 6-3 Sunday, winning the Madrid Open and leaving her top-ranked opponent so exasperated she smashed her racket to the ground. […]

Already slated for completion in 2019, the Serena Williams Building is set to be the biggest structure at Nike’s World Headquarters, and will tower at more than 1 million square feet while covering nearly three city blocks […]