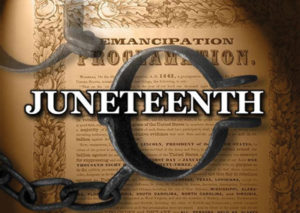 Over 500 people will gather at Washington Park Community Center, 5199 Pembroke Rd., Hollywood Fla., for the second held Juneteenth South Broward Festival on Saturday, June 15, 2019 from 10 a.m. to 8 p.m. This is a family and community free event and is open to the public.

Juneteenth is an historic celebration among African Americans that honors the announcement of the end of Slavery. On June 19th, 1865 news finally reached Galveston, Texas that African Americans were no longer tied to enslavement which was made official through the emancipation proclamation that was passed more than two years prior on January 1, 1863. Although the news reached people at different times in the South, folks came to a collective decision to recognize June 19th as a national holiday.

It is no mistake that the second held Juneteenth Festival will take place at the Washington Park Community Center in Hollywood, where the first African American voting place was held in a neighbor’s yard, Mrs. Idabel Hill on Mayo Street. “I could not think of a better place to celebrate the Right to Vote in Broward,” says Georgette, Hollywood Activist and founding committee member of the festival. This local event will kick off with a lively parade being led by Junkanoo Dancers and Stilt walkers which starts at Marry Saunders Park and will go to Washington Park Community Center. After the parade there will gospel performances, artists, motivational speakers and a bounce house for the children. The goal of this event is to create historical awareness of this historic holiday, create a space for youth, connect organizations with the community and to provide small business owners a great opportunity to market themselves.

The mission of the South Broward Juneteenth Celebration Committee is to actively preserve and promote the broad spectrum of African American heritage through educational and cultural activities that benefit the City of Hollywood and surrounding South Broward communities.

For additional questions and inquiries related to becoming a sponsor, vendor or volunteer for South Broward Juneteenth, visit Juneteenth.Site.