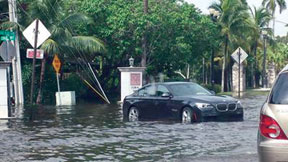 Writing for the Westside Gazette since 1985, I’ve mostly focused on changes in the built and natural environment as well as our national parks. In the 90s my husband Frank and I drew attention to the urban redevelopment efforts increasing the density of downtown redevelopment, and shared how the Black community could leverage environmental justice measures to make sure we benefit from the change. We kept you abreast of issues connected to the restoration of the Everglades and worked with Rep. Carrie Meek to get a clause included in the federal Water Resources Development Act of 2000 stating that minorities had to be part of the economic opportunities from the restoration.

So it feels surreal that in 2015 the issues have accelerated to an extreme and yet my friends and family seem almost completely unaware that South Florida is in the bull’s eye for flooding from climate change as the ocean rises in the next 15 years. It’s  bizarre to get emails from organizations around the country that use Fort Lauder-dale as Ground Zero for the worst climate effects, yet few of my friends that live here even seem to know.

A brief Google search for “South Florida flooding and sea level rise” will shock you with where the water is projected to be in just 15 years, 2030. Think New Orleans after Katrina, except that there will be no “after,” as this becomes the new normal.

I wouldn’t blame you for thinking I sound hysterical, because any sane person would reason that if such a thing is on the horizon and there’s something we can do about it, we would all know and be involved. I can tell you categorically that cities across the country are using “adaptive” management that look at development in a whole new way, focused on dealing with the coming flooding. Professionals have made this their field of expertise, and some of them are available through our Diverse Environmental Leaders Speakers Bureau. The Mayor of Baltimore told me in a recent interview that they issued their Climate Action Plan in 2013, developed in consultation with all sectors of the community so that as many people as possible under-stand the threat and are part of the solution.

Why are we so far behind?

Recently I received an invitation from the South Florida Regional Planning Council to the SE Florida Regional Climate Leadership at the Casa Marina Resort in Key West Dec. 1-3. Maybe that’s a beginning. But the way to handle something that affects all of us cannot be for a few people to huddle in a resort and decide. We need a wide scale communications effort that gets the right information to the right people through the right sources so that everyone knows what’s coming and feels that the solutions include their interests.

Last week Friday, Nov. 13, members of the Intergovernmental Panel on Climate Change (IPCC), the world’s leading climate scientists, met in Miami to talk about how to get people to care about climate change. They agreed that focusing on our wallets might be the way. Flooding will cost us millions of dollars in lost property, lost revenue and loss in quality of life. I’m presuming that research showed that money is the way to our hearts. We’ve always felt it was more important to focus on the opportunity and responsibility to take care of our life support sys-tem and benefit as citizens from everything involved.

The Hispanic community is getting involved. This week I received an invitation to the VotoLatino Power Summit at the Frost Art Museum at FIU, Nov. 17, at 6:30 p.m., “Defending Our Future: Fighting Climate Change in South Florida.”

Where is the leadership in the Black community? It is well established that non-white Americans and people who are poor suffer the greatest hard-ships when environmental dis-asters occur, and are least prepared economically to deal with them. What will it mean when the land west of the train tracks currently occupied by Black citizens suddenly becomes the only high, dry and desirable land? We should be at the front of the line talking with our government officials and requiring them to show us their plan.

Since we are obviously not getting this vital information from state and local govern-ment, it falls to our elected officials, our state, local and federal representatives to make that demand. But that will not happen until we start calling the people we vote into office and demanding to know what’s happening on this issue. Ignorance will be no defense.

(Audrey Peterman is an environmentalist and writer living in Fort Lauderdale. www.earthwiseproductionsinc.com)

The NAACP issued the following statement regarding KRON-TV anchor Henry Wofford’s use of racist stereotypes to insult and belittle Sean “Diddy” Combs’ interest in purchasing the Carolina Panthers NFL team.

‘Bill O’Racist’ at it Again