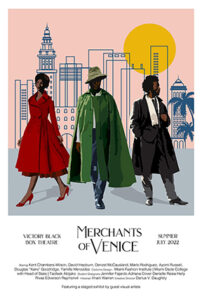 Shakespeare and South Florida Poetry have created a love child…and it’s beautiful. Black Author, Poet, and Playwright Darius Daughtry’s Merchants of Venice is a smorgasbord of artistic genius that needs to be experienced and seen by every member of the community, especially in black and brown households and communities of color. Merchants of Venice takes William Shakespeare’s traditional Merchant of Venice, but with a modern-contemporary twist that highlights parts of our Fort Lauderdale history as it pertains to racial inequality and economic disparity. Performed by an All-Black Cast of local South Florida actors, and Written and Directed by Darius Daughtry—Merchants of Venice takes us on a journey through deeply rooted issues such as racism, the moral price of debt, communal collaboration, and socioeconomic disparities.

The Traditional Shakespearean “Merchant of Venice” was a 16th-century play in which a merchant in Venice named Antonio defaults on a large loan provided by a Jewish moneylender, Shylock. Though in this modern-contemporary version, Poet and Playwright Darius creates multiple merchants and recreates Shylock’s character as an affluent Black Elder. The original play is believed to have been written between 1596 and 1599. However, in this Historic Fort Lauderdale version, the play is set in the mid-1930’s— highlighting social issues and the current events of that time.

Grace Arts, a Florida Non-Profit theater company, in collaboration with The Art Prevails Project, have assembled a talented cast of young performers to tell this Shakespearean Classic in a uniquely adapted fashion featuring costume designs by Miami’s Fashion Institute and talented South Florida actors of color.

“Our take on ‘Merchants of Venice’ replaces Shakespeare’s Venice with Miami and Belmont with Fort Lauderdale, with a focus on the South Florida Black Renaissance beginning after The Great Depression. Shylock, played by veteran actor Kent Chambers-Wilson, represents the survivalist tactics of Black elders who managed to create wealth despite the constraints of the devastating economic crash and racist policies,” said Director of Grace Arts Clare Vickery.

She continues, “Miami and Fort Lauderdale have historic African American commercial districts and neighborhoods with many successful and iconic cultural

sites and businesses that no longer stand; but were in full bloom in the 1930s through the 60s”. This very notion is carried out through the play’s messaging. Highlighting such prominent times in our history but also raising awareness about the rise of communities, enterprises, and businesses of color.

Merchants of Venice debuted this past weekend, and is said to the official first production at the new Victory Black Box Theatre in Fort Lauderdale located on Sistrunk Boulevard inside of the L.A. Lee YMCA Mizell Community Center. The production offered a variety of evening showings running from July 7th through the 10th, with the traditional optional matinee Sunday afternoon.

“It was my mandate and a commitment that I made to myself and to the community when I took this position, to make sure that this Black Box Theater was a space where the community could come and perform to a level of artistic excellence that they deserve”, said Director of the YMCA Cathleen Deas.

“So it was important to me to outfit this space with the best equipment; microphones;

mixing boards; stage; so that they could feel that they weren’t getting short changed and that they had the equipment to match their talents,” she added.

When we think about Shakespearean Theater, we fathom traditional classic stories and sonnets like Romeo & amp; Juliet; Hamlet; or perhaps even Othello. Unless you’re a die-hard Shakespeare fan, the chances of your knowledge over other traditional classics like Much Ado About Nothing, King Lear, or The Merchant of Venice— are slim to none.

With such a vast collection of works, Shakespeare’s plays cover a variety of topics ranging from social classism to the fight of power and righteousness; to tales of love and conflict. Shakespeare is arguably the most influential writer in the English language, as his works continue to be studied and reinterpreted and his plays have been written, performed, and studied around the world. Additionally, his work has been translated into every major language  and performed more commonly than any other playwright.

So it is undoubtedly a work of art to be able to witness such an iconic piece of literary and thespian works, brought to life by an all-Black cast, in the local community; in a Black Box Theater setting; right in the heart of Fort Lauderdale’s Historic “Belmont”—Sistrunk. A Historic AND Modern-day “Black Wall Street” in the City of Fort Lauderdale. Fostering and serving as home to a variety of Black-Owned business, enterprises, museums, and community resource centers.

“It’s super important for me to bring this play to my community because I’m from the area,” says Playwright Darius Daughtry.

Smiling resiliently, Daughtry continues, “I was born in Broward General Hospital and knowing what this area has been, then what it became, and what it’s trying to become now- like, all of that is important. And as we start to think of gentrification and things, we could potentially lose like—the culture, and lose the history. So I think it’s super important to maintain that history. So to be able to speak ABOUT the area, but to also DO IT in the area— is of utmost importance to me.”

Clare Vickery of Grace Arts said the inspiration for the adaptation of Merchant of Venice came years ago while researching the Underground Railroad. As a part of their programming each year, Grace Center produces a Shakespearean adaption that infuses Florida History. This series of plays and adaptions is known as the “Shakespeare La Florida Series.” Most recently, Grace Arts produced a Tango- Hip-Hop Romeo and Juliet; set in 1960’s Miami that includes a West-Side Story vibe and classical Broadway feel twist with elements of Afro-Cuban Culture and social issues.

Merchants of Venice left audience members wanting more and inquisitive of a potential part two or even taking the show on the road. But one thing is for sure, is that for those 1 hour and 50 minutes, you were truly captivated from start to finish.

“I love being able to be a conduit for the audience emotionally. And to achieve that, the actor must be available and transparent; and then that way— I can absorb you into my character and then take you on that ride emotionally with me” said actor David Hepburn who played the role of     Merchant Antonio.

The production was broken into 2 Acts. Act 1 included 9 scenes; and Act 2 included 5 scenes.

Each scene opened with its very own feel and theme utilizing various elements of music and even dance. The variation in scenes oftentimes opened with Cellist and Electric Guitarist Aviel Del Rosario; while other scenes opened with Acoustic Guitarist, Actor and Vocalist Douglas

“Xaire” Goodridge, whom also served as the Narrator and Casted as the role of “Lorenzo”. One very particular scene that stood out from the rest was during Scene 8, Act 1 when Antonio bursts from the back of the Audience welcoming us to his “Fiesta Club”. The scene opens with an exciting and unexpected crowd interaction piece lead by Antonio. This unique twist to contemporary playwriting, catches the crowd off-guard by infusing participatory lines into Antonio’s performance to the audience. In a very witty and clever manner, Antonio was able to get crowd members to willingly participate in the scene— as we BECAME THE VERY FIESTA CLUB, the play included in their script.

Though the mood and theme of this play is a comedy, Merchants of Venice also focuses on core issues by paying homage to the Fort Lauderdale lynching. The play features the tragic events surrounding the public lynching of Ruben Stacey in 1935 and it’s impacts to the community, as it pertains to this very pivotal moment in our history.

“History is always important, as much history as we can illuminate, we become better by knowing more. There was a lot of research that had to be done and a lot to ingest as I’m sure some of the actors had to as well in their research, in order to really connect to the work and their characters,” said writer Darius Daughtry.

According to Grace Arts, Chapter 2 of Merchants of Venice is Planned for Miami in the first quarter of 2023 as part of the “Shakespeare La Florida” series,

which is a multidisciplinary theater series that features live music, dance, and visual artwork by the region’s innovative and culturally diverse artists. For now, Part 1 has been requested bring to multiple cities. However, the organization is always looking for ways to expand and bring quality programming to the community. If interested in supporting this production or want to see it brought TO YOUR CITY, the best way to support is to donate or become a Sponsor of Grace Arts FL.

Major life events and turbulent situations can inspire change. It can also inspire groups to be formed. Groups like the Black Panther Party or NWA are just minor examples of a long list of advocates. In 2018, artist Jai Tahlea Allen-Ible created The Uproar Project to marry her passion for the arts, social activism, and community service. We had the opportunity to catch up with the founder to discuss the organization and the origin. […]