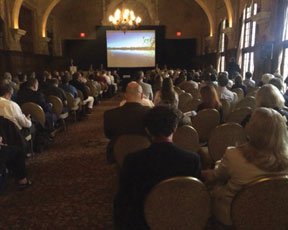 South Florida: Will body bags be our answer to rising seas?

1990s efforts to be more inclusive have fallen behind as 95 percent of participants in this year’s conference were white.

At an environmental meeting in Atlanta August 2005, the Black keynote speaker from Louisiana told the audience he’d just returned from New Orleans. On a helicopter ride over the levees with city and federal officials he said, they discussed how the dikes would not stand up to a Category 5 storm.

Then he said the words that chilled my soul forever:

It’s January 2016 and I am chilled to the bone visualizing this situation happening here in South Florida and other coastal cities around the country. According to every projection from every scientific entity studying the issue, rising seas from climate change and a warming ocean make it inevitable that much of South Florida will be inundated by 2030. The only question is whether we would have made preparations to survive it or whether, like New Orleans, there’ll be bodies floating, possibly to be retrieved in body bags.

I am forced to write this terrible story not only to warn of the catastrophe ahead, but also to illustrate the fallacy of thinking that our leaders will warn us and making life saving changes while they can. I saw this clearly at the 31st Annual Conference of the Everglades Coalition last Friday. How easily are leaders seduced by their own short-sighted focus while blissfully ignoring the risk to millions of human lives?

The Coalition comprises more than 50 of our country’s leading environmental organizations; the US Army Corps of Engineers and other federal agencies; state and local agencies and government leaders – arguably some of the brightest minds and the most knowledgeable people in our county. For 31 years they’ve focused on restoring the Everglades, and in 1999 they presented their George Barley Award to Frank and me for our success in engaging African Americans with the restoration.

Today both science and experience point to South Florida as the epicenter for effects from rising seas that will wipe out property and could certainly wipe out lives in another 15 years.  Yet I had a persistent feeling of déjà vu at the conference, where 17 years after 1999 the same people are still having the same conversation, as if the Everglades is an island to itself, its fate separate from that of the region.

It wasn’t until the venerable US Senator Bill Nelson spoke at lunch that I got the feeling of being in the 21st century dealing with the problems of today. The Senator laid out the comprehensive threat to our shores, life and property, including the fact that our porous limestone water source, the Biscayne Aquifer, stands to be flooded with salt water from the rising, warming ocean. The crowd gave him a standing ovation, then went back to business as usual.

Speaking on a plenary panel later, “Ecology and Economy: National Park Restoration for Local Communities,” I strove to steer the conversation to the entire ecosystem. I mentioned multiple reports showing that “Florida is in the crosshairs of climate change. Rising seas, a population crowded along the coast, porous bedrock, and the relatively common occurrence of tropical storms put more real estate and people at risk from storm surges aggravated by sea level rise in Florida, than any other state by far. Some 2.4 million people and 1.3 million homes, nearly half the risk nationwide, sit within 4 feet of the local high tide line. Sea level rise is more than doubling the risk of a storm surge at this level in South Florida by 2030.”

I pointed out that the majority of people in the urban areas know little if anything about these issues and rely upon “environmentalists” and leaders such as those in the room to take the lead. I suggested that the combined talent assembled should coalesce to provide the leadership our state lacks, and emphasized the urgency with which our economy must be re-tooled to focus on protecting us from flooding. It’s going to take all of the 15 years we have to get ready if we start now, I warned.

Thankfully, that seemed to break through to some of my fellow panelists, though many of the coalition leaders seemed to have abandoned the plenaries in favor of networking or other activities.

“Well if you’re talking about infrastructure, you should say so,” said William Talbert, president and CEO of the Greater Miami Convention and Visitors Bureau. “The business community understands infrastructure. They love building roads and bridges.  But ‘restoration’ is not a word they understand.”

Really? So here we have the great flaw in our system of democracy: The public expects the people we put in office to look out for our interests; many elected officials will not take leadership on an unpopular issue even if it means life or death unless their constituents insist on it; many constituents don’t know what the problems are or how direly it will affect them, and many environmentalists have staked out their little slice of territory, completely overlooking the forest for the trees.

Who will step up to lead us out of this predicament? Or, at what point will we need to start ordering body bags?

By Jay Weaver     Federal authorities Wednesday stepped up their assault on the viral-like crime of identity theft and tax fraud, arresting dozens of South Florida suspects on charges of filing fake returns totaling millions of […]