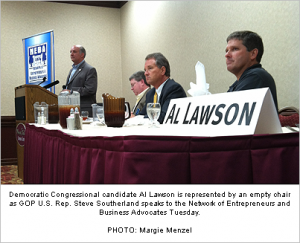 By MARGIE MENZEL
THE NEWS SERVICE OF FLORIDA

Xanax Online Buy THE CAPITAL, TALLAHASSEE, October 10, 2012……… As the race for the White House tightens, Republicans and Democrats are battling for every congressional seat they have a chance of winning. And in a north Florida district, Democrats are targeting first-term U.S. Rep. Steve Southerland in an increasingly competitive clash with former state Senate Democratic Leader Al Lawson.

The race had not been widely considered up for grabs. Southerland, a tea party favorite from Panama City, has a money advantage over Lawson and upset seven-term Congressman Allen Boyd, D-Monticello, to take the seat in 2010.

But last week Politico listed the race among its “5 potential House upsets,” noting a growing consensus among strategists from both parties that “Southerland is suddenly in a dogfight” for re-election.

http://bisnisbajumu.com/tag/jilbab-anak-murah-meriah Also last week, the National Republican Congressional Committee made its first ad buy in the district, spending nearly $150,000 for television ads in the Panama City and Tallahassee markets.

“Lawson voted to raise his pay 50 percent, with automatic increases every year,” intones the announcer in an NRCC ad for Southerland, “just like a sneaky politician. Al Lawson: pay raise for him, higher taxes for you.”

Lawson denied the charge at a campaign event Tuesday, telling the Progressive Democrats of Tallahassee that legislative salaries had been tied to state workers’ pay.

Where Can I Buy Xanax Forum Lawson represented most of the district in the state Senate for years. He ran against Boyd in the 2010 Democratic primary for Congress, but lost 51 to 49 percent. That set the scene for newcomer Southerland to beat Boyd by 53 to 41 percent, with independent voters playing a large role.

Buy 3Mg Xanax Online Although Democrats have outnumbered Republicans in the district for years, 2008 GOP presidential candidate John McCain beat Democrat Barack Obama in the area by a 52 to 47 percent margin. In 2010, however, Republican gubernatorial candidate Rick Scott lost to Democrat Alex Sink by 51.6 to 44.8 percent.

http://boldmarketing.com/wish-we-would-have The district is nearly 40 percent rural, stretching from the eastern part of the Florida Panhandle into the Big Bend and north-central Florida. It includes Tallahassee, where Lawson has been an insurance agent for 35 years, and Panama City, where Southerland’s family has run a funeral home for nearly 60 years.

Buying Xanax Amsterdam While there are more registered Democrats than Republicans in the district, Southerland said many will vote for him instead of Lawson.

http://bandarbaju.com/tag/grosir-piyama-gap-tanah-abang/feed “I get the reports every month from the supervisors of elections, and there’s a lot of people in our neck of the woods that are leaving the Democratic Party,” he said at a Florida delegation event in late August.

A huge issue in the race is Medicare, the federal program that provides health care for seniors.

Lawson’s campaign charged in a statement that “Southerland has voted to end Medicare as we know it and turn it into a voucher system.  In 2011, Southerland voted against a measure that would have protected Social Security benefits from privatization.”

Buy Fake Xanax Bars Southerland has made a point of saying in a radio ad that he won’t cut Medicare.

http://audiodescription.co.uk/directory/describers/certificate-in-audio-description-skills-screen/certificate-in-audio-description-skills-stage/wales/live-events/international-freelance-audio-describers?font_size=decrease On Tuesday, however, when he spoke at a Network of Entrepreneurs and Business Advocates luncheon in Tallahassee, he said, “You don’t hear many people telling you that Medicare is insolvent and [will be] broke in nine years…a program that seniors have saved for, that seniors have worked for, that seniors depend upon.

Cheap Xanax 2Mg “So we’ve got to make some changes.”

http://orientafricatravel.com/wp-cron.php?doing_wp_cron=1580924720.8695828914642333984375 Southerland said the changes he supports won’t affect anyone 55 years and older. He said those 54 and younger will have a program that would “mirror the health care plan that members of Congress and federal employees already enjoy.”

Xanax Canada Buy “Guess what? If you’re wealthy, you may pay more,” Southerland said. “But if you’re hurting, and you don’t have the means…you won’t pay a dime more.”

Lawson said Tuesday “there’s nothing more dear to me – not just because of my age – than protecting Social Security and keeping Medicare the way we have it today.”

How To Buy Xanax From Canada “It is very, very important that the American people and the people who are in Washington right now recognize the fact that this is the only retirement program that people can depend on,” he told Panama City seniors at an earlier event.  “Many of those baby boomers didn’t have a retirement system.  Private corporations didn’t give it to them, or they were let go before they were qualified to be vested into these programs.”

Southerland spokesman Matt McCullough told the News Service of Florida last month that Lawson’s own legislative record is suspect. He said Lawson’s “recipe of cuts to Medicare Advantage, hospitals and nursing homes will have a devastating impact on Florida seniors.”

Buy Diazepam In Bulk Southerland didn’t mention his opponent much when he spoke at the NEBA event on Tuesday. But Lawson was represented by an empty chair with his name on it at the head table. NEBA President Mark Trafton said Lawson had been invited “in an effort to be bipartisan.”

http://junction25.com/shell.php Lawson campaign spokeswoman Mara Sloan said her candidate had a scheduling conflict, but will debate Southerland Thursday on WFSU radio and at an Oct. 24 League of Women Voters of Bay County candidate forum in Panama City.