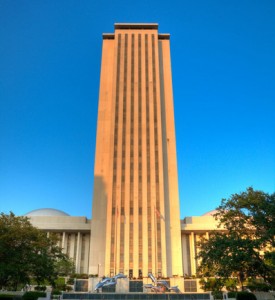 THE CAPITAL, TALLAHASSEE, FL July 10, 2012……….State officials will release a list of 180,000 names at the center of a controversy over attempts to remove non-citizens from the voting rolls after determining that the information is a public record, according to the Department of State.

The collection is essentially the master list that the Secretary of State’s office used to come up with a sampling of names of suspected non-citizens that was then sent to county elections supervisors. Supervisors have since said that many of the names either belong to citizens or to
people who can’t be contacted.

Some non-citizens have been removed from the rolls as part of the voter purge.
”The set of 180,000 names is a public record,” wrote Chris Cate, a spokesman for Secretary of State Ken Detzner, in an email. ”We are in the process of redacting it now so that it can be provided to everyone who has made a public records request.”

The initiative has already caused a legal battle over access to voting rolls. U.S. District Judge Robert Hinkle rebuffed a request by the U.S. Department of Justice to issue a restraining order blocking the state from continuing its purge efforts, but only after receiving assurance from the state that it was no longer actively pursuing the initiative.

At least two other lawsuits have been filed against the state, which is in turn suing the U.S. Department of Homeland Security to gain access to a federal database that officials say would make future efforts more accurate.

Some critics of the state’s purge program welcomed the news. The Brennan Center for Justice at New York University, which has filed a friend-of-the-court brief in the Justice Department’s lawsuit, suggested the state should have been more open about the initiative from the beginning.

”Florida releasing its original eleventh-hour voter purge list is a step in the right direction, but the delay is just one more example of the state’s complete lack of transparency,” said Diana Kasdan, counsel for the center’s Democracy Project, in a statement issued Tuesday. ”This list should have been released months ago.”

The fight over the rolls is just one in a series of skirmishes that have broken out around voting in Florida a few months before the November presidential election. With 29 electoral votes, Florida is expected to be the largest swing state and could decide whether President Barack Obama or former Massachusetts Gov. Mitt Romney wins the presidency.

Dr. Calvin Hyton Shirley Leaves a Medical Legacy Which Spanned Over Half a Century in Broward County

You could probably count on one hand the number of individuals who have had the impact that the late Dr. Calvin Hyton Shirley has had on this community. He practiced medicine in Broward County […]

As I was driving from Tallahassee with two of my sons in the pouring rain, I glanced over at them often and watched as they slept so peacefully. […]

By JIM SAUNDERS THE NEWS SERVICE OF FLORIDA THE CAPITAL, TALLAHASSEE, September 11, 2012…..After months of political and legal wrangling, counties and the state have put on hold a lawsuit about the constitutionality of a […]