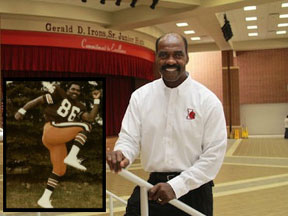 The Super Bowl is in Houston Texas this year and the official sponsors of the Houston Super Bowl Committee Shell Oil Company are continuing the upcoming Super Bowl Festivities, one of which included the Educator Event. This event took place at the Houston Museum of Natural Science.

One of the people honored was 10 year NFL veteran and University of Maryland Eastern Shore Athletic Hall of Famer, Gerald Irons. Shell recognized him at the event for his dedication to Houston community education. He also has served on the CISD (Conroe Independent School District) board for 19 years, and also was a past President. He is currently the Senior Vice President of Business Development with Conine & Associates, Commercial Real Estate Advisors. On behalf of The Woodlands Development Company, he represents commercial real estate. He has three sons all of whom have graduated from Conroe ISD high schools. All five members of the Irons family were honored by the Woodland residents as “Original Hometown Heroes” at the Woodlands 25th year celebration.

Irons has played for 10 seasons in the NFL as a linebacker, and all of his kids has followed in his footsteps playing football. His youngest son played defensive end/linebacker for the Oakland Raiders and attended Notre Dame, while his oldest son Gerald Jr. played for the Nebraska Cornhuskers and his middle son Jarrett played for the Michigan Wolverines. Gerald Irons has been listed among the 100 greatest Cleveland Browns of all time. Irons was also inducted into the Maryland State Hall of Fame in 1984.

Irons earned his Bachelor of Science Degree in Business Administration from Maryland State College. HE then earned his master’s degree in Business Administration from the University of Chicago. When he retired from football, he was selected by the Osaka Japan Jaycees to represent the U.S. at its worldwide “Ten Outstanding Young Persons Conference.” This is held for 10 days in Osaka. While he was there, he met with the Crown Prince, Crown Princess, the Prime Minister, and the Mayor of Osaka who presented him a gold key to the city.

Mr. Irons has done a lot for the Houston community and he was one of the few honored. Congratulations to him and the other honorees.