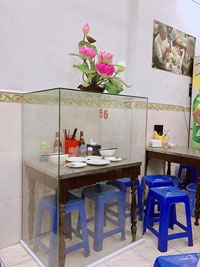 A table on which former US President Barack Obama had a $6 meal in a restaurant in Vietnam has been properly identified and preserved for tourism purposes.

It was in May 2016 when President Obama was photographed sitting on a plastic chair with a bowl of pork noodles on a table in front of him. He was at the Bun Cha Huong Lien restaurant in Hanoi in the company of US celebrity chef Anthony Bourdain.

Now, the table he sat at on that day has become a tourist attraction. Two years down the line, the table, which is still having plates, bowls and chop-sticks, empty beer bottles and surrounded by plastic stools is preserved and covered with glass so people can view it.

The owners of the restaurant said they came to a decision to preserve the table after realizing that many customers were coming in and asking to know where exactly Obama sat and what he ate while there.

“The customers love it, many take photos next to the table,” co-owner of the restaurant, Nguyen Thi Hang Nga, told the BBC. “For us, it is a nice memory that we will cherish forever. It is not a PR gimmick, I don’t think we get more clientele.”

He continued, “The display was set up just before the Lunar New Year [in mid-February] and I haven’t noticed any change in the flow of diners.”

To ensure they preserve the moment right, the owners set the table exactly the way it was done for Obama.

“Of course, the bowls and plates on display have been washed, as well as the empty beer bottles,” the owner said.

Mr. Bourdain took to Instagram, where he shared a picture of the table on which he shared a meal with President Obama, captioning it: “Not sure how I feel about this.”

The honor to dine with a visiting president is normally a preserve of the hosting country’s top leaders. That’s why the Obama visit becomes the first recognized in which a foreign leader of his caliber did what he did.

Following the visit, many foreigners from across the globe have stopped at the restaurant to partake of the signature dish, which has since been dubbed Obama’s bun cha. It’s made of grilled pork, patty and bacon, served with a sweet broth and rice noodles.