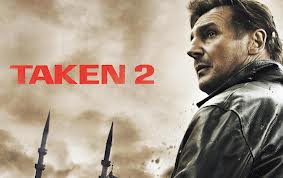 by- Shawn Fitzgerald          The Liam Neeson sequel Taken 2 led a lively Columbus Day weekend at the North American box office. The follow up to Neeson’s 2008 surprise blockbuster easily led the field which included solid holdovers from Hotel Transylvania and Looper. One film that didn’t make much of an impact was Tim Burton’s 3D animated comedy Frankenweenie, which scored with critics but met with indifference from ticket buyers. Not only did the box office jump up 26% from last weekend’s numbers, this weekend’s top ten was up a huge 62% over business last year at this time.

In the original Taken, Liam Neeson used “a particular set of skills” to take out the several thousand Eastern Euro baddies in an attempt to rescue his kidnapped daughter. Not only did he succeed in saving his daughter, Neeson also scored a huge sleeper hit in the dead of winter. Opening in late January 2009 to a solid $24 million en route to a huge $145 million final domestic haul, Taken helped take Neeson’s career to a new level and established him as a reliable action star in the process. Given the first film’s enormous popularity, it was not surprising that Fox was eager for a sequel.

It might have taken four years for it to happen, but Taken 2 arrived on 3,661 screens this weekend and the wait appears to have been worth it given the mammoth $50 million opening that doubled the original’s opening weekend tally. It was slammed by critics who issued a weak 20% approval rating on Rotten Tomatoes. But reviews weren’t crucial to the first film’s success (the original earned a middling 58% approval rating) so why should it be the second time around? All audiences want to see is Neeson kicking some more Eurotrash ass in an effort to rescue his once-again kidnapped daughter. In addition to its mammoth North American opening, the film also made a killing overseas where it earned $67 million. The sequel should eclipse the first film’s foreign take of $81 million sometime this upcoming week.

Last weekend’s number one film, Adam Sandler’s 3D-animated comedy Hotel Transylvania, had a solid second weekend. It eased a mere 38% from its record opening to earn an estimated $26.3 million to bring its total to the $76 million mark. The film is enjoying solid word-of-mouth from that crucial demographic of family audiences, which should help the Halloween-themed laffer have a solid run throughout the month of October. Hotel could make its way to $125-130 million in domestic sales and has reached $29 million in foreign markets.

After making a lot of noise in limited release last weekend, the Universal comedy Pitch Perfectexpanded into wide release to earn a good $14.6 million from 2,770 theaters. To date, the Anna Kendrick flick has earned a solid $21.6 million to date and could sing its way past the $50 million mark.

While it took a hit from the arrival of Taken 2, the sci-fi action flick Looper still managed to hold its own thanks to positive word-of-mouth from opening weekend crowds. Off 41 percent, the Joseph Gordon-Levitt time travel flick earned a good $12.2 million in its second weekend to bring its total to the $40.3 million mark. Looper is looking to close the loop at the domestic box office with approximately $60-65 million and considerably more from overseas.

Poor Tim Burton, it seems he just can’t catch a break this year. His update of Dark Shadows was a creative, critical and financial dud, barely earning $80 this past spring. Now, his critically-adored 3D animated feature Frankenweenie has hit one of those cinematic speed bumps as well. The film underperformed in its opening weekend with a tiny $11.5 million from 3,005 theaters. What made that number even more distressing for Disney is that most of those screens were charging higher prices for 3D showings. Undoubtedly, the movie’s box office chances were considerably curtailed by the continued success of fellow 3D family horror comedy Hotel Transylvania. Considering how much it costs to bring a family to the theater these days, there may not be enough room for two similar features aimed at the same demographic at once.

The remainder of the top ten were as follows:

Next weekend Liam Neeson and Taken 2 will face a particularly diverse field of competition in Ben Affleck’s Argo, Here Comes the Boom, Atlas Shrugged Part II, Seven Psychopaths, and Sinister. Look for Taken 2 to finish in the top three, if not challenge for first place in its second weekend of release.