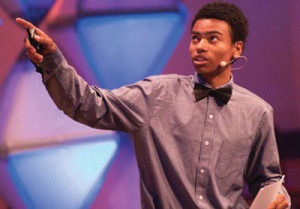 Black Enterprise spoke with 17-year-old George Hofstetter, who is working on some of today’s most troublesome social justices issues.

Like many other high school seniors, Hofstetter is in the hunt to land a seat at a top university. But unlike most of his peers, he’s already a business owner. He established George Hofstetter Technologies Inc. at age 16 and was recently an honoree of the Equal Justice Society.

Developing apps that document excessive police force is a fertile area, according to The Huffington Post. The wave of viral videos showing police killings of unarmed Black men inspired app developers to collaborate with advocacy groups. They’ve produced dozens of smartphone apps that enable users to document allegations of police abuse—many of them with the intention of preventing miscommunication during police encounters.

Hofstetter told the magazine that his interest in technology grew from participating in his first hackathon at age 13. At that event, Hofstetter and his friend created an app to enable students of color to support each other at predominantly white private schools.

“At the time, I was attending a private school and experienced institutionalized racism,” he told Black Enterprise. “We found a way to help other students.”

That experience drove Hofstetter to focus on how he could “really change the world’s perspective on race through technology.”

He has his sights set on pursuing his interest in artificial intelligence at UCLA, where he would like to study computer science and psychology.

The Westside Gazette Newspaper is honored to feature these contributions made by Broward County students in our Jr. Photojournalism Program.

During a set of comments with reporters present, President Trump said, “We have people coming into the country, or trying to come in — and we’re stopping a lot of them — but we’re taking people out of the country. You wouldn’t believe how bad these people are. These aren’t people. These are animals. And we’re taking them out of the country at a level and at a rate that’s never happened before. And because of the weak laws, they come in fast, we get them, we release them, we get them again, we bring them out. It’s crazy.” […]