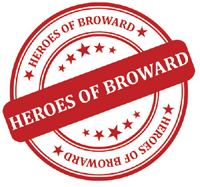 Ms. Terry A. Williams Edden has been in the fight for Civil and Human rights for over 39 years.  She began her journey with her mother Mrs. Mattie B. Slappy Williams and her father the late Mr. Joseph (JD) Williams.  Her father would have his young daughter accompany him at the Lombo’s Fish Market in Pompano Beach off Hammond Ville Road, which is now called Martin Luther King Blvd.  Her father would have her sit on a cart as she would assist people that would visit or need help in that area with completing Social Security application, writing other states for birth certificate of those that did not know their assumed birthdates, and  she would also assist those who weren’t able to read or understand how to get access to important information.

She has dedicated herself to helping those in need of support fighting against police brutality and educational disparities in our school system.  She helped form programs and meetings regarding students being arrested in our school system along with North Broward NAACP based in Pompano Beach and former School Board Member Benjamin Williams. She has fought to ensure funds from the Community Redevelopment to be used in their intended neighborhoods as mandated by federal laws. From unemployment to human rights being violated under EEO, EEOC laws,  even assisted with completing expungements, clemency and civil rights restoration of restored.

One of Terry’s most memorable request came when she received a phone call in the middle of night for help; this particular night the call was concerning kids playing basketball being harassed on a public park by the police which led to one of them being arrested.  While recovering from a recent surgery she started making phone calls to the police to find out where the child was located. After speaking with the officer in charge the child’s situation was reviewed that night and the child was released from the City Jail into her custody; she took full responsibility for the young man until his parents could be reached.

The late City of Pompano Beach Commissioner E. Pat Larkins, North Broward NAACP, Black churches and Ms. Terry fought hand and hand against police matters where Black residents were pepper-sprayed by local law enforcement, racial profiling and mistreatment in the Liberty Park community. The groups organize meetings with Terry walking throughout neighborhoods speaking to residents and inviting them to participate.

She was among some of the first people in Pompano Beach to get involved with free reading and tutorial programs under Learning for Enrichment Development Institute, serving those inner-city youth parents who were not as fortunate as others to afford ways in providing reading and tutorial services to their children.

One of the most sustainable things that keeps Terry going is that she understands “the People you Help never forget and they later will do the same.”