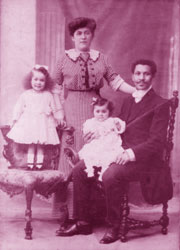 The amazing story of the one Black family on the Titanic: A pregnant wife’s struggle to survive

When all of the stories are being told about the tragedy of the Titanic back in 1912, no one ever mentions the Black man on the boat.  His name was Joseph Philippe Lemercier Laroche, and he was a Haitian engineer, educated in Paris.  Laroche was the only Black male passenger on the boat, and was traveling with his pregnant wife and two daughters at the time.

Being the devoted father and husband that he was, Laroche got his daughters and wife onto a lifeboat.  They survived but he did not.

Laroche went to study Engineering in France at the age of 15. But being Black meant that he could not find work, so he planned to return to Haiti with his family.  His uncle, Cincinnatus Leconte, was the president of Haiti and helped him to obtain work as a math teacher.

Laroche’s mother initially purchased a ticket for the family to travel aboard the La France liner. But after finding out that the ship had a policy against children dining with their parents, he cancelled the tickets.  The tickets were then traded in for a ride on the Titanic.

After the Titanic tragedy, Laroche’s wife Louise went back to Paris with their daughters and gave birth to a son, Joseph Lemercier Laroche.

The family boarded the Tita-nic in Cherbourg France on April 10, 1912 as second-class passengers. When the ship hit the iceberg that sank it, Joseph and his wife gathered their girls and went to the deck. They are believed to have been on LifeBoat 8, which also held Noël Leslie, Countess of Rothes.

The family was picked up by the rescue ship RMS Carpathia, where the mother had trouble finding diapers for her children.  So, she was able to take napkins after each meal and use those instead. When the family arrived in New York city without the girls’ father, there was no one there to meet them.  So, instead of going on to Haiti, the pregnant mother decided to take her girls back to France.