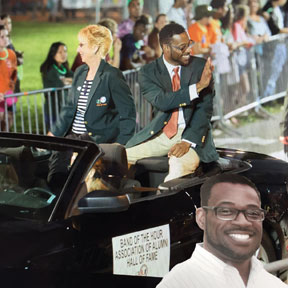 The honorees in the Hall of Fame Class of 2014 are: Reverend Charles Damon, Walter Etling and Sherry Sue Schnell Hancock.

The University of Miami BOTHA of Alumni and Friends established a Hall of Fame in 1994 to identify and honor, in a permanent manner, those individuals who have achieved excellence in performance and or musicianship in the Band of the Hour or who have contributed to the Band by support in time, resources or talent. 2014 marks the 20th year of the Hall of Fame.

Reverend Charles Damon has served as Assistant Director of Programs for the Band of the Hour for the past 15 years, working closely with the students and staff of the band, other university officials, and band alumni. Charles has been the face of constancy for the athletic bands for well over a decade.

For years, Charles has facilitated the activities of the Band of the Hour, participating fully in all performances and events of the band program, including marching band performances, travel, festivals, and concerts.

Charles provides not only logistical support but the wisdom of his experience.

His demeanor and compassion are some of his greatest attributes, which have benefited the band so greatly. His daily presence is calming in nature to all faculty, Teaching Assistants, and undergraduates. His concern for everyone affiliated with the band is genuine to a point of altruism. Everyone who has been a part of the band knows they can come to Charles for the answer to a question, advice, or a shoulder to lean on.

Charles voluntarily coordinates the Hurricane Flags section of the band, recruiting and training them for their performance contributions to the band.

The logistical assistance from this group of students is invaluable to the success of the band at each performance.

It is not much hyperbole to state that everyone on the UM campus knows Charles Damon respects him, and considers him a friend.

Rev. Damon is the son of Deaconess Catherine J. Mason, of the New Mount Olive Baptist Church of Fort Lauderdale, Fla. and is the first African American to be inducted into The Band of the Hour Association’s Hall of Fame

Walter Etling is being honored posthumously as a member of the Class of 2014. Walter played saxophone in the Band of the Hour and served as Drum Major prior to graduating with a degree in economics in 1948. Etling left a legacy that will long be remembered.

Sherry Sue Schnell Hancock, while married to William B. Russell, who served as the Di-rector of Bands at the University of Miami, often offered their home to many of the band students for Thanksgiving and other holidays. Sherry was commonly and affectionately known as the “Band Mom” who cared for the band students as if they were her own.