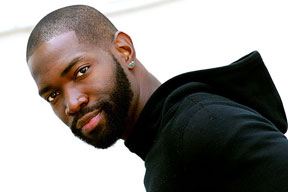 Tarell Alvin McCraney, author of the play “In Moonlight Black Boys Look Blue,” the basis for the film “Moonlight.” He, along with the film’s director Barry Jenkins, received the Academy Award for Best Adapted Screenplay.

The Black AIDS Institute congratulates Barry Jenkins, Tarell Alvin McCraney, and the cast, crew, and producers of “Moonlight” for their transformational Oscar triumph, winning Best Picture, the first film about LGBTQ issues ever to win the Oscar for Best Picture. “Moonlight” follows a Black gay boy as he finds his way and himself in a world that hates him and is literally trying to kill him. Given the backdrop of the current political, social, and cultural climate, it is the most important film of the year.

It is also the most moving. I saw “Moonlight” three times. I cried each time, and I told all my friends to go see it. I actually saw all 10 films nominated for this year’s Best Picture award, and “Moonlight” was by far the one that moved me the most—not just to tears but to action.

Los Angeles Times film critic Kenneth Turan called “Moonlight,” “a film that manages to be both achingly familiar and unlike anything we’ve seen before”. It is a beautiful line. But who is the “we” that has never seen this be-fore? Yes, “‘Moonlight’ the movie” is a “beautifully shot and told coming of age story about blah, blah, blah,” and all the things he and other critics have said. It is easy to be swept away with the artistry of the film. And who doesn’t love the little film that could? But let’s not get it twisted. “Moonlight” is a story that in real life, if not on the big screen, we have seen all too often be-fore.

It is about Tarell McCraney’s life. It is about Barry Jenkins’s life. It is a-bout the lives of countless Black boys in Liberty City, Harlem, the Southside of Chicago, South Los Angeles, Detroit, and all over this country.

Kenneth Turan’s “we” sees them and crosses to the other side of the street.

If those boys get too close, “we” clutch our wallets and purses a little closer. “We” allow them to be demonized because it allows us to sleep at night as “we” fill prisons and justify their mass murder by police, or ignore the nearly 50 percent unemployment rate among Black youth, or that Black gay and bisexual men in America have a 50 percent—1 in 2—chance of becoming HIV positive over the course of their life time. Moonlight touches some of us not because it is a story that we have never seen, but because it is a story that we know well—tragically well.

That’s why it seemed almost appropriate that “Moonlight” won the best picture Oscar the way it did, with “La La Land” initially being announced the winner only to discover there was a mistake in the envelope. “We” almost failed to “see” us, yet again.

Every Black boy needs to know that there is somebody who has his back! A need that all too often is left unmet. “Moonlight” grabs us by the ears, pulls us in, begs us to look into that Black boy’s eyes and see him—all of him, and to really finally have his back.

Congratulations to Best Supporting Actor, Mahershala Ali; the writers Tarell McCraney and Barry Jenkins for winning Best Adapted Screenplay; and to producers Adele Romanski, Dede Gardner, and Jeremy Kleiner for Best Picture. I hope the Best Picture Oscar for “Moonlight” doesn’t just end up a trivia question. I hope it does more than help us feel better about ourselves, the event used to prove we are not racist or uncaring. I hope that if Tarell and Barry have helped us to see the protagonist Chiron (who as a young man called himself Black), it moves us—all of us—to action.

Wearing a red AIDS ribbon (a reminder that the HIV/AIDS epidemic is not over, especially among Black Gay men), Tarell McCraney nailed it on Sunday night when he said, “This goes out to all those Black and Brown boys and girls, and non-gender conforming, who don’t see themselves, we’re trying to show you, you and us.”

Phill Wilson is the president and CEO of The Black AIDS Institute, the only national HIV/AIDS think tank in the United States focused exclusively on Black people. Follow him on Twitter @iamphillwilson. Wilson is also available for interviews and press inquiries. Contact (213) 353-3610, ext. 105, or PhillWilson@BlackAIDS.org.